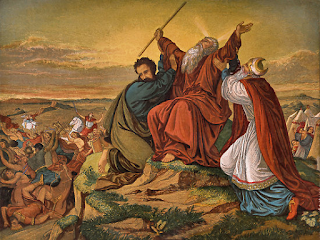 We hear this often in police dramas at the time of an arrest, or see it demanded of prisoners of war. It is a universal image of surrender, and expressive of helplessness in the presence of a force with the upper hand.

The image came to mind as I read the Scripture passages for this past Sunday. The first reading from Exodus (17:8-13) recounts the action of Moses as the people of Israel face battle with the hostile king Amalek and his army. He raises his arms. This is not concession to the enemy. Just the opposite, in fact. It is as if Moses hears not Amalek but God saying to him “Hands up!”, because his gesture is an expression not of helplessness in the face of a fierce army but of reliance upon Almighty God. It is, indeed, an expression of surrender, not to the enemy but to truth: the truth that we are dependent upon God and without him can do nothing; the truth that God will not fail to be with his people and answer their prayers for justice (cf. the Gospel, Lk 18:1-8).

In this light it is clear that we, too, need to have our arms raised in prayer constantly. The Christian life is dramatic. Forces both within and without are constantly pressuring us to rely not on God but on ourselves, to turn away from fidelity to him. St. Paul, in his second letter to Timothy (3:14 - 4:2) goes straight to the heart of the matter. “Beloved: Continue in what you have learned and firmly believed.” Well, what we have learned and accepted firmly in faith is that God has come to us in Jesus Christ, in whom he has revealed both his nature and his plan of salvation. Only Jesus is Saviour. Only Jesus has the words of everlasting life. Only his is the voice to follow. To “continue in what [we] have learned and firmly believed” is to stay faithful to Jesus at all times, to remain ever obedient to his teachings. Siren songs of infidelity surround us, tempting us away from what we have learned, often by distortions of the truth. In the face of this battle, the call is clear: “Hands up!” Pray constantly to God, that he grant us the gift of fidelity to the words spoken in his Son.

In this prayer we are called to support one another. Particularly striking in the passage from Exodus is the role of Aaron and Hur. When Moses grew weary and began to let his arms fall, they held them up, thus supporting his prayer. We do the same for one another, moved by the awareness of our collective dependence upon the mercy of God.

Let us together head the summons to constant prayer spoken by St. Paul: “The Lord is near. Do not worry about anything, but in everything by prayer and supplication with thanksgiving let your requests be made known to God. And the peace of God, which surpasses all understanding, will guard your hearts and your minds in Christ Jesus.” (Philippians 4:5-7)
Posted by Archbishop Richard W. Smith at 6:00 AM