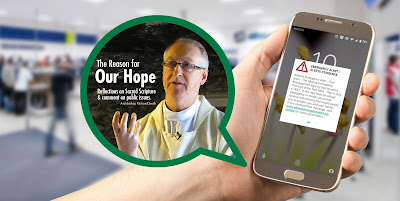 One night the other week, at a rather late hour, my mobile phone started to make a rather strange and very loud noise. I nearly jumped out of my skin! Turns out, it was the Alberta Emergency Alert system, sending an urgent message to everyone about a child feared to be abducted and in danger. Thanks be to God, the child was found soon thereafter safe and unharmed.

This emergency alert system, established to send out warnings far and wide when one life or many lives are in danger, is obviously a good thing. It emits warnings that we are glad to receive, however inconvenient, and which we would be foolish to ignore.

Christians, too, have an emergency alert system. It is called the Bible. Throughout the pages of Sacred Scripture, amidst the many assurances of God’s love, are warnings that our good Lord issues to His people to help them avoid danger. These, too, are a matter of life and death, indeed, of eternal life and eternal death. The warnings summon us to change sinful ways, and thus may be experienced as “inconvenient,” yet we would certainly be foolish to ignore them.

Such warnings were given to us in the Gospel for this past Sunday’s mass (Luke 13:1-9). As Jesus was teaching, he made reference to two recent events that were apparently on everyone’s mind: the cruel killing of Galileans by order of the vicious governor, Pontius Pilate, and the accidental death of another group caused by the collapse of a tower. Some thought this had to be divine punishment for grievous sin. Jesus clarified that God does not do such things. At the same time he issued a warning: sudden death can come to anyone, for a variety of reasons, so one must be ready through repentance, and for this there can be no delay. The time to get one’s life in order is now. Otherwise, we risk eternal punishment.

As we ponder this particular warning, at once both stark and welcome, we realize there is another implicit within it, namely, to be sure to treat our individual lives with the seriousness they deserve. This emerges as we reflect upon the encounter between God and Moses at the burning bush (Exodus 3: 1-8a, 13-15). God reveals Himself to Moses in two ways: as “I Am”; and as “the God of Abraham, Isaac and Jacob”. In other words, God who is Being itself, who is mysterious, transcendent and in need of nothing, nevertheless chooses, out of love, to involve Himself in the lives of His children in order to reveal His love and invite our loving response. That such a response might be real on our part, God gives us freedom, which He will respect in the act of judgement. The decisions we make for or against God in this life will have eternal consequences. Life is very serious, indeed! One way in which we can treat it frivolously is through the sin of presumption.

Jesus makes clear in the parable of the barren fig tree (Luke 13: 6-19) that, although God is merciful and patient, nevertheless we must not presume upon that mercy. St. Paul makes the same point as he warns against complacency and arrogance (1Corinthians 10: 1-6, 10-12). When God issues His warnings to repent, there must not be any postponement of our response.

I’m told that, had my mobile phone been turned off, I would not have received the emergency warning. Likewise, we shall miss the salutary warnings issued by God if we keep the Bible closed. May the Lord give us the grace to seek out His Word daily, and to heed with both dispatch and thanksgiving the warnings that He gives us.
Posted by Archbishop Richard W. Smith at 10:35 AM