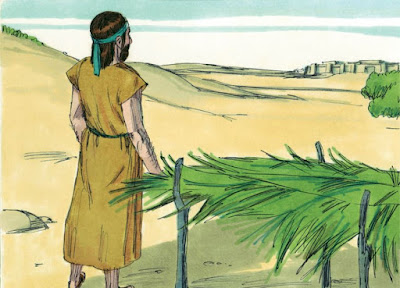 The civic holiday Thanksgiving Day coincides this year with Monday of the 27th Week in Ordinary Time of the liturgical calendar. The readings for the mass of that day include the beginning of the well-known story of the prophet Jonah (Jon 1:1 - 2:1, 11). The narrative relates the call of Jonah to preach to the inhabitants of the ancient city of Nineveh. Jonah doesn’t like the idea at all. He decides to run away, and determines to go to Tarshish.

Scripture scholars are undecided about the exact location of this ancient place. There are, however, two aspects of this locale on which there is general agreement. They render Tarshish an important symbol, which establishes an instructive connection between the attitude of Jonah and the mindset of today.
First, Tarshish is understood to have been some place on the far side of the Mediterranean from what is now the Holy Land. In other words, by determining to flee to Tarshish Jonah was striving to get as far away from God as possible. Hmmm. Sounds familiar. In our own day we give voice in multiple ways to the desire to leave God far behind. At the public level we hear (or say) such things as: Keep religion private! The insights of faith have no place in the public square! Personally, too, we may strive to run from God. Jonah was called to preach; we are called to a life of virtue. If our existence is marked by attitudes and behaviours that run counter to the call to holiness, we may be tempted to flee from God and His Word. 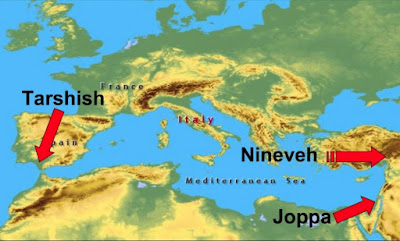 Second, Tarshish is referred to in Scripture as a source of much sought-after precious metals (cf. for example, Ezekiel 27:12). Wealth is a powerfully attractive symbol of self-reliance. Yet, precisely as such, it is also dangerously illusory. The flight to Tarshish away from God symbolizes the desire to replace dependence upon God with reliance upon our own resources. On this point much of Western society might be tempted to adopt Jonah as its patron! Yet the pursuit of such a desire is tantamount to running from reality into the arms of fantasy. The truth is that all things come from God. He bestows upon us the gift of life itself and holds us in existence by His merciful love. Apart from God we are nothing.
This leaves us with the question: why flee? If God is all-good and all-loving, why run from Him and toward ourselves; from reality to falsehood? Again, consider Jonah. He was afraid of God and of God’s call. To Jonah, the presence and voice of God had become a threat to his own freedom. Here we encounter the lie that has caused great ruin to the human family throughout its history, the falsehood first put in the minds of Adam and Eve by Satan: God is not to be trusted; His will impedes our freedom; His commands are obstacles to human flourishing. Therefore, flee God and pursue your own will and desires!

Right. The experience of Jonah makes clear where that will get us. No sooner does he decide to flee God and fend for himself, no sooner does he get into the boat destined for Tarshish, with all that it symbolizes, than there comes upon the ship and its voyagers a great storm that threatens them all with perishing. We can’t do it alone. We need God and His love. Pretending otherwise is an illusion with potentially lethal consequences. 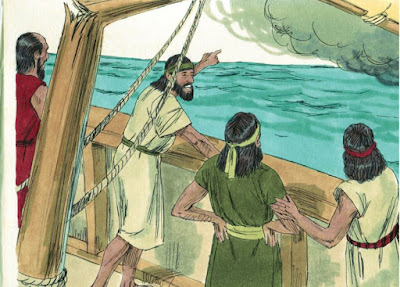 God is no threat to freedom. There is no need to fear God. In fact, His love reveals liberty’s true nature and unleashes it. Freedom is among God’s gifts to us. We live in accord with true freedom when we freely choose to trust in the wisdom and providence of God, and to rely, in peace and thankfulness, upon His every good gift.

Forget Tarshish. Choosing that destination is to embark on a journey that leads to nowhere but disappointment and hardship. Instead, let’s choose simply to be thankful to God, trusting and not fearing, and to express that thanks with a willing acceptance of His call to virtue and the fullness of life.
Posted by Archbishop Richard W. Smith at 12:22 PM