Wall of Separation and People of Reconciliation 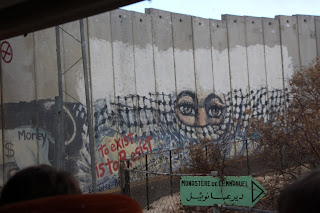 I think it hit the first-time visitors like the proverbial ton of bricks. That wall. Today was Bethlehem, which is sealed off from Jerusalem by a very high, concrete, militarized security wall. One passes through a military checkpoint in order to enter. Seeing it for the first time can be a shock to the system. We hear about it, but only when one actually sees it does its reality truly sink in. The experience is particularly poignant when one enters with the goal of visiting the birthplace of the Prince of Peace, of the one whose life, death and resurrection has the power to break down walls of hostility and estrangement (cf. Ephesians 2: 13-16). 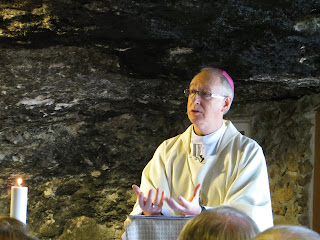 This was very much on our minds as we began the day with mass at Shepherds' Field. Gathered in a cave in the region where shepherds first received the announcement by angels of the astonishing news of the birth of the Saviour, we echoed their song giving glory to God as we belted out Gloria in Exclesis Deo, "Glory to God in the highest, and on earth peace to people of good will." But what does the announcement of peace mean when spoken within a security perimeter? This led us to ponder those "walls" we erect in our own lives that separate us from others, even family members. And what about the wall we often put up between ourselves and the mercy of God? Only when we allow that wall to crumble by bringing to God any as yet unrepented sins will the walls separating us from others begin to collapse. The immensity of the geopolitical challenges to peace should not leave us under the illusion that we can do nothing. Individual and collective efforts to effect peace are possible when we seek to remove the walls in our own lives. 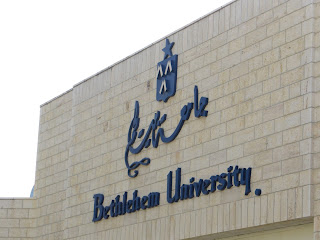 We were treated to a concrete and edifying example of just that in our visit to Bethlehem University. This is the only Catholic institute of higher learning in the region. It is a true beacon of hope because it educates Muslim and Christian students alike. In fact, seventy per cent of the student body is Muslim and the remainder is Christian. These young people have studied side by side for years, often since their early grades. The friendship and mutual affection that exists among them is evident. About ten of the students took time to meet with us, tell us their stories, and answer our questions. Their living conditions make travel to and from the university very challenging, yet they are committed to their education for the sake of placing themselves - Muslim and Christian together - at the future service of their people. No walls here. We pray that this example of real-life peaceful co-existence will become a widespread reality throughout the region. 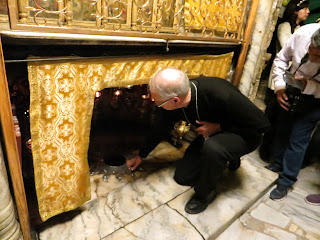 We ended the day with a visit to the Church of the Nativity. There we were able to touch the very spot where Christ was born. Again, one of those head-shaking moments. We then went next door to the church of St. Catharine, made famous by the worldwide broadcast from there of Bethlehem's Christmas midnight mass, and visited the place beneath that church where St. Jerome once dwelt, seventeen centuries ago.

To return to Jerusalem we had to cross through that security wall again. This imposing perimeter makes one wonder if peace will ever be possible here. Yet the grace of Christ at work in the people we met on the other side of that wall gave us good reason to hope that there will be.