Sons and Daughters in the Son

Astonishing, really. By baptism, we have been adopted by God! God's love is so great that he has united us to his Son by the gift of the Holy Spirit, thus making us his children.

This was at the heart of our reflections today as we visited sites in Jerusalem. How does the event recalled at a particular location speak to us of Jesus's relationship with his Father? What does it teach us about our call to live as the Father's children in Christ? 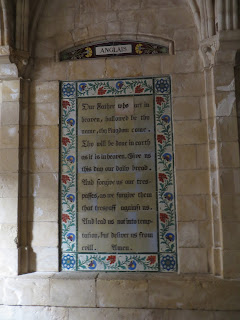 Fittingly, the day began at the top of the Mount of Olives, at the Pater Noster (Our Father) church, built over the cave identified by Tradition as the place where Jesus would rest with his disciples and teach them. Among those teachings was the Our Father.

We took note of the possessive pronoun, "our", and recalled how the risen Jesus, when he appeared to Mary Magdalene, asked her to announce to the apostles that he was ascending "to my Father and your Father; to my God and your God." (cf. John 20:17). The distinction between "my" and "your" arises from the fundamental difference between Jesus and us: what he is by nature, we become by adoption. Truly, in Christ, God is "our" Father. 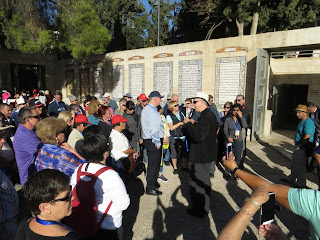 With this in our minds and hearts, we immediately set off down the Mount of Olives, following the Palm Sunday road. Before any word was spoken, this path signaled something of what it means to live authentically as a child of God. The Palm Sunday road led to the Cross. Union with Christ as his brothers and sisters inescapably involves the gift of self for others.

At the foot of this roadway is the Garden of Gethsemane. Before reaching that site, though, we paused along the way at the place where Jesus wept over Jerusalem (cf. Luke 19:41-44). This pause gave us pause. The Lord wept because his people had not recognized "the things that make for peace", since they hadn't acknowledged "the time of [their] visitation." Admittedly, we, too, often do not recognize the divine visitation in our own lives, or pay it scant attention, and thus miss many opportunities to seek the grace of conversion, which truly makes for peace. The Lord has cause to weep over us as well.

At Gethsemane, the relationship of Jesus with his Father came strikingly to light. Aware of his impending suffering, he poured his entire self into his prayer to his Abba, his Father, entrusting himself entirely into the Father's hands. St. Paul teaches us that the Holy Spirit poured into our hearts is the Spirit of the Son, enabling us also, through our union with Jesus, to cry our "Abba! Father!" (Cf. Galatians 4:6) We entered the church built at this site upon the rock where Jesus had cast himself down in deep, fervent prayer as he endured his agony. As we touched that same rock we made the prayer of Jesus our own, and brought to the Father all that weighs heavily upon us, knowing that only this act of self-surrender, in trust, can enable us to do as Jesus did: stand again to face the reality of our lives with faith in the Father's love.

The Holy Spirit of which St. Paul speaks was first given to the Church at Pentecost, when he descended upon the apostles gathered in the "upper room", which was the next holy site on the day's itinerary. There, too, of course, was the site of the institution of the Eucharist and of the priesthood. By some miracle, we had the place to ourselves, and so were able to pray tranquilly with St. Paul's scriptural teaching on the institution of the Eucharist (cf. 1Corinthians 11:23-26) as well as the biblical account of Pentecost (cf. Acts 2: 1-11). By offering us the gifts of his body and blood in the Eucharist, Jesus invites us to be one with him in his self-offering to the Father for the life of the world. Only by the gift of the Holy Spirit can one truly respond to such a call. So we prayed in thanksgiving for the gift of the Holy Spirit, especially as given to us when we received the sacrament of Confirmation. 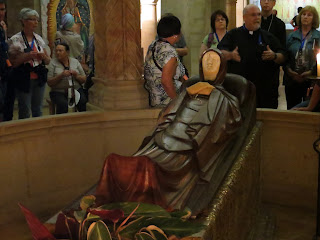 This site is next to the Abbey of the Dormition, that is to say, the place that recalls the death of Mary and her subsequent assumption body and soul into heaven. In the grotto beneath the church there are wonderful mosaics and frescoes, one of which has always struck me as especially poignant. It is a ceiling fresco of the heavenly Jesus receiving his mother in his arms following her Assumption. She is depicted with the dimensions of a child and wrapped in swaddling clothes, i.e., Jesus doing for her what she did for him when she welcomed him at his birth. This portrayal of breathtaking tenderness speaks powerfully of the indissociable relationship of Mary with her Son in the unfolding of God's plan of salvation, and thus stands as an invitation to all who gaze upon it to ponder their own particular relationship with her.

We sang a hymn of praise to Mary, and then prayed together the Hail Mary, asking at this place recounting her death that she pray for us at the hour of ours. 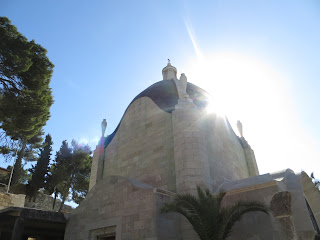 The final visit was to the church of St. Peter in Gallicantu, built at the site of the house of Caiaphas, the High Priest, and the place of Peter's threefold denial of Jesus. We celebrated mass there, asking the Lord to reveal to us by the same look he directed to Peter (cf. Luke 22: 61-62) how we, too, have denied him and are in need of conversion of both mind and heart. Particularly moving was our descent to an ancient dungeon discovered beneath the church. It is clear that this is the place where Jesus was kept throughout the night in those hours between his arrest and trial. Standing in that place deep beneath the earth brought home very powerfully the depth of Christ's trust in the Father. Abandoned by all and totally bereft of companionship in this darkest of hours, what must he have felt?! The answer is given eloquently in Psalm 88, which we prayed aloud in that heart-rending place.


Lots of tears today. How could it be otherwise, when we consider what our Lord lovingly endured to enable us to become, in him, sons and daughters of our heavenly Father?

Homily at St. Peter in Gallicantu