It was pretty bleak territory. Today we left Jerusalem and headed down from the mountains toward Jericho. This route took us out into the Judean wilderness and to the region around the Dead Sea. Very arid, certainly, but the area has its own beauty. It is rich in theological significance also, since the landscape's imagery underscores in dramatic fashion the words spoken here by St John the Baptist.

Our first visit was to Massada, famous as the place of a desert fortress community built by Herod the Great upon a mountaintop. It is universally remembered as the place where a community of Jews sought refuge from Roman vengeance following the Jewish revolt of 67 AD, and chose to die there at their own hands rather than by the Roman legions. 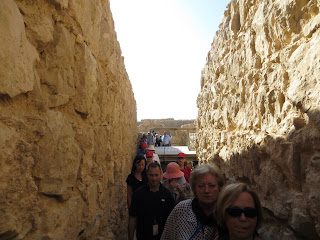 From there we traveled along the coast of the Dead Sea to Qumran, site of the discovery of what are now called the Dead Sea scrolls. After having lunch there we moved on to Jericho.
In that ancient city (and I mean ancient - 10,000 years back!!) we celebrated the Eucharist at Good Shepherd parish. The significance of marking in this place the beginning of the Advent season was lost on no one.

This wilderness in which John the Baptist heralded the coming of the Saviour was a symbolic invitation for us to enter the interior desert of the human heart parched by lack of faith and to ask for the gift of "living water" (cf John 4: 7-14). 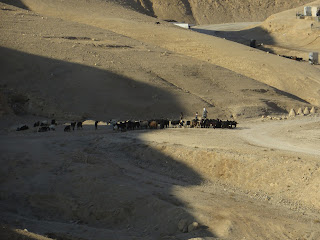 Our visit to this city also involved a stop at the home of the founder of Guiding Star, the tour company here that has arranged our pilgrimage. This very gracious gentleman likes to give his guests gifts, so we were each given a beautiful cross and treated to local oranges and bananas. 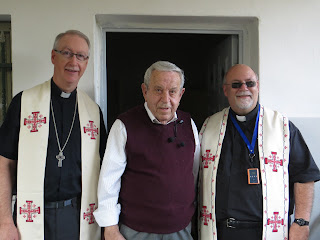 As we left town we passed by a local sycamore tree to see what one looks like (remember Zacchaeus?). Then from a distance we saw and pondered what is called the Mount of the Temptations, so called because identified by Tradition as the place where Jesus, following his Baptism by John not far from here, was tempted by Satan. 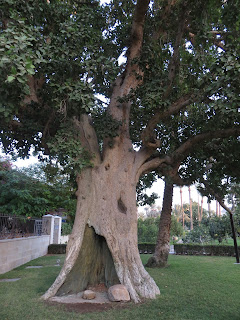 It is often said that the land here is the Fifth Gospel because the experience of it brings to very clear light the words of the four evangelists. Today we found this particularly true of the Judean wilderness. We need to acknowledge our own interior deserts and ask for the living water of the Holy Spirit.

Homily during Mass at Jericho
Posted by Archbishop Richard W. Smith at 2:08 PM