Moving Downward in the Ascent

Pilgrimages to holy sites are representative of the pilgrim nature of our earthly life. "Pilgrim people of God", in fact, is a key descriptor of the Church in the documents of the Second Vatican Council. A pilgrimage to Jerusalem is especially evocative of the pilgrim journey we are called to walk toward the heavenly Jerusalem, our eternal home. The physical ascent to this city on a mountain symbolizes the heart's journey "upwards" toward heaven. The sites we visited today along the route to Jerusalem illustrated for us some of the attitudes that take shape in the heart of the pilgrim follower of Christ.

Listening. The disciple is one who listens to the voice of the Master and follows. This was the lesson in our visit to the Stella Maris monastery on Mount Carmel in the city of Haifa. It is built over the site of the cave in which the prophet Elijah is said to have dwelt. 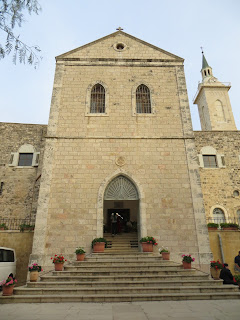 We reflected on his encounter with the Lord in this place, and marveled at his fidelity as he went where his listening led him. Listening to and announcing God's Word did not win him many friends, to say the least, yet he remained always steadfastly faithful to the Lord and his commands. We pondered as well the example of listening offered by Mary, the Mother of the Lord. This place was named in her honour centuries ago when the original Carmelites settled in this spot. Mary is the model disciple; she listened, pondered and followed, even as the Word led her to the foot of the Cross of her Son. Always the faithful and obedient listener, she is rightly called Star of the Sea, Stella Maris. Just as the bright star guided ancient mariners, Mary is the necessary point of reference whereby we can pinpoint our position as disciples and adjust course as necessary to follow the right direction along our pilgrimage. 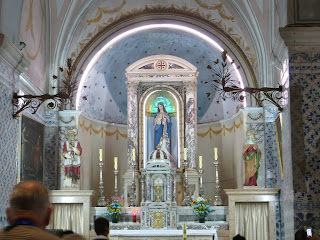 Realism. After we left the monastery we traveled along the mountain chain toward the interior of the country, to the site of the encounter between Elijah and the prophets of Baal (cf. 1Kings 18: 17-40). This dramatic showdown illustrates in striking fashion the nature of idolatry as the worship of nothing, as an allegiance to what is illusory and unable to answer the cries of the human heart. What is real about life comes to light in the encounter with the real God, who has made known his love and saving plan in real fashion by sending us his Son, Jesus. The pilgrim disciple needs daily to face the illusory desires and attachments in his or her life so as to be set free to worship and follow God alone. 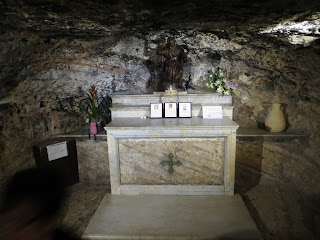 Mercy. Before reaching Jerusalem we stopped to visit the site of the visitation of Mary to Elizabeth. The very hilly landscape through which we had traveled from the area near Nazareth to this spot brought home the full meaning of: "In those days Mary set out and went with haste to a Judean town in the hill country, where she entered the house of Zechariah and greeted Elizabeth" (Luke 1:39-40). It would have been a very arduous journey. No comfortable tour bus for her! Yet, having heard from the angel Gabriel that the elderly Elizabeth was with child, Mary went "with haste" to her cousin in need. Here Mary teaches us about mercy and charity. It arises from the encounter with the Word of God and impels us out of ourselves towards the needy. It admits of no delay and allows no obstacle or hardship to stand in the way. The pilgrimage to the heavenly Jerusalem is marked by mercy. 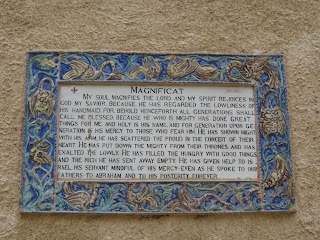 Prophecy. Our final stop before Jerusalem was the site of the birthplace of St. John the Baptist. Here we considered the example of his father, Zechariah, and pondered the relationship between faith and speech. When Zechariah expressed disbelief at the angel's announcement to him, he was made mute (cf. Luke 1: 5-25). When later he indicated obedient acceptance of the message, his tongue was loosed and he spoke freely words of prophecy (Luke 1: 57-79). When God is shunned we have nothing to say; when his Word is accepted in faith, we are enabled to speak words of truth. This is clearly relevant to our experience in Western culture, which seeks in various ways to eclipse God. What we have to endure, as a result, is a multiplicity of empty and banal messaging, or, worse, words that turn us into ourselves and against one another. Time to let God back in, so that once again we learn to speak prophetic words of truth, justice, love and mercy, words that really matter and make a difference.

Humility. While still in that same place we looked to the example of John the Baptist himself. Many asked him if he were the Messiah, and he would always deflect attention away from himself and towards Jesus. As we hear him put it in the Gospel of John: "He must increase, but I must decrease" (John 3:30). The focus is always on Jesus and not on the self. This fashions within the heart of the Christian pilgrim a sort of "downward mobility" as we make our ascent to Jerusalem on high.