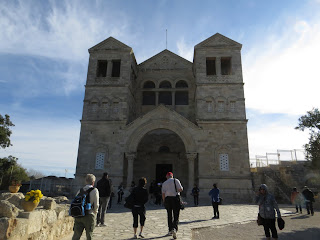 We were asking ourselves this question today. Like the other pilgrims we are meeting here in the Holy Land, we, too, are taking lots of pictures. After we've snapped the photo, the first thing we do is look at the camera screen to see how it turned out. Naturally, these are memories we want to preserve, so we want good and memorable images stored in our cameras. At the same time, however, we know that the most important place those images must be preserved is in our hearts. They are digitally held in our camera so that we can later keep, delete, or alter them as we please. We want the experiences etched indelibly in our hearts so that the Lord can change us in accord with his purposes. And we had many experiences to absorb today. 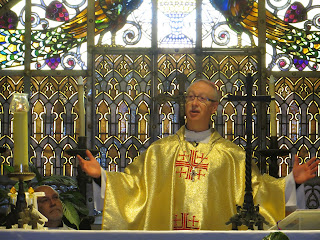 We began with mass at the site of the Transfiguration. There we heard the account of that wondrous event and heard anew the voice of the Father: "This is my beloved Son; listen to him." That listening is necessary, we know, but not always easy, because the voice of Jesus summons us to ever deeper conversion. That's the journey that lies before us as we descend from the mountaintop experience and return to our ordinary day-to-day living.

From there, and following lunch (I love shawarma), we made our way to the place where Jesus multiplied the loaves and the fish. The church there is built over the rock held by Tradition to be the "table" on which the multiplication took place. 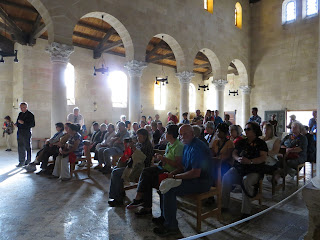 Before it, preserved in the floor of an ancient church once existing on the site, is a mosaic depicting four loaves and two fish. This is striking theologically, because the answer to the immediate question - but, weren't there five loaves? - is that the fifth is actually Jesus. The true meaning of the multiplication is given in the discourse pronounced by Jesus in the ancient synagogue at Capernaum: he is the Bread of Life that satisfies not for a moment but for all eternity, "bread" that is given to us as His true Body and Blood in the sacrament of the Eucharist. We were saddened to see damage left by a fire at the church, the result of arson perpetrated as an act of violent anti-Christian hatred. This gave us pause, and we took time to pray for those responsible.

Then we returned to the church of the Primacy of Peter. We had already celebrated mass there upon our arrival Sunday evening, but wanted to return to spend more time. This place is always a highlight among highlights. The pilgrims spread out along the shore of the Sea of Galilee as we read John 21 and reflected upon the meaning of the miraculous catch of fish and the beautiful encounter between Jesus and Peter. That arresting question - "Do you love me?" - is addressed, we know, not only to Peter but also to each of us. Like Peter, we know that our response is a weak one, but also that Jesus meets us where we are and leads us by grace to the answer of total commitment that he desires. We also took time to pray in the little church built over the rock upon which Tradition tells us Jesus cooked fish to share as a breakfast meal with his friends. 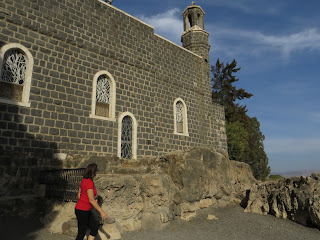 Finally, we visited the Mount of the Beatitudes. There we read aloud and reflected upon that first section of the Sermon on the Mount (cf. Matthew 5:1-12). Here again, as at the beginning of the day, we knew we were listening to that voice of the Son whose words contain the call to a radical change of both mindset and action. Enlightened by Christ and his Word, we see reality as it is, and this makes clear just how radically different from human standards of judgment are those of God.

While we were there, warplanes were heard far overhead, probably around the time we were listening to "Blessed are the peacemakers..." In addition, the Franciscan sister who welcomed us was from Iraq, where her family in Mosul recently had to flee for their lives to Kurdistan to escape ISIL aggression. Clearly, the Beatitudes are of timeless relevance and current urgency.

Cameras capture and preserve images instantly. Having them engraved on our hearts is another matter. The "shutter release" is the act of faith, by which we ask the Holy Spirit to use all that we are experiencing to bring about within us a heart thoroughly and permanently transformed.

Homily during Mass at Basilica of the Transfiguration