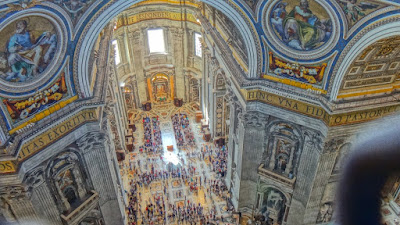 
We began with a celebration of the Divine Liturgy, presided by our Ukrainian brother Bishops, who are part of our regional episcopal assembly. Gathered at St. Peter’s Basilica, we offered the liturgy at the altar of St. Basil, where the mortal remains of St. Josaphat have been placed for public veneration. Ukrainian seminarians studying in Rome, together with the Vice-Rector of the seminary, joined us and led us in their beautiful singing of the liturgy. St. Josaphat was martyred for the faith in the 1600’s, in particular for his determined and courageous promotion of unity between Eastern Rite Churches and the See of Rome. Fidelity to Christ involves sacrifice, unavoidably; such sacrifice may also extend to the offering of one’s own life. I’m sure there were many prayers ascending from our hearts during the liturgy for Christians who, even today, are being martyred for their faith. 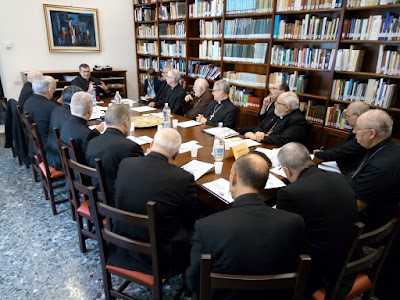 Throughout the day, we visited four Vatican dicasteries, where discussion was held of topics relevant to the competency of each. In the morning, we began with the Congregation for Bishops, where we discussed various dimensions of the episcopal ministry. It was a special delight for us to meet with the prefect (head) of that department, our Canadian brother Cardinal Marc Ouellet, who shared with us memories of the ministry he exercised in Western Canada, especially as rector of St. Joseph’s seminary in Edmonton. This gathering was followed by a session at the Congregation for the Doctrine of the Faith, where we brought to them our assessment of the theological and philosophical issues that impact our current life of faith, and heard from Cardinal Mueller and his collaborators their own insights and questions about the situation of the Church in our country.


The afternoon and evening was entirely taken up by visits to three dicasteries. At the first, the new Secretariat for Communications, we learned of the exciting work that is being undertaken to integrate the various communications vehicles of the Holy See and their future plans. We were very impressed and encouraged by their vision and competence, and now look forward to discovering ways in which our own diocesan communications departments and networks can collaborate with this Secretariat. Then we visited the Pontifical Council for the Promotion of the New Evangelization, where the officials shared with us the various positive initiatives they have undertaken for an effective and attractive announcement of the Gospel. At that same department, which was responsible for organizing the recent Jubilee of Mercy, we spent a fair amount of time sharing with them our own many positive experiences of the way the Year of Mercy was received and celebrated in our respective dioceses. It was clear to all of us that this particular moment in the history of the Church was a special moment of grace for the People of God. 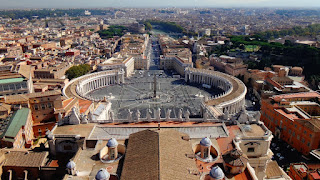 Finally, we returned to the Apostolic Palace, where yesterday we had met with the Holy Father. On this occasion, we visited with Archbishop Paul Gallagher, who is the Vatican’s Secretary for Relations with States (Foreign Minister). With him we discussed a number of issues that, while experienced globally, also impact our local lives: e.g. freedom of conscience and religion, human trafficking, refugees, and the persecution of Christians.


At the end of this last session, we arranged to go out on a small terrace overlooking St. Peter’s Square and looking almost directly down upon the façade of St. Peter’s Basilica. The view of the Square, Rome and the distant mountain ranges was stunning. We then were led on a visit to a special private chapel of the Holy Father within the Palace. Named the Redemptoris Mater (Mother of the Redeemer) chapel, it is entirely decorated with the mosaics of the celebrated artist Fr. Marko Rupnik. The beauty of this sacred space takes one’s breath away. The images give expression to the whole of salvation history, centered upon and fulfilled by Jesus Christ. One could take a whole week simply to meditate upon this artistic treasure, but we were certainly grateful for the few minutes we were able to spend there.


Our reception here in every department is warm and fraternal; a real experience of the communion of the Church. I’m looking forward to the blessings that yet await us. 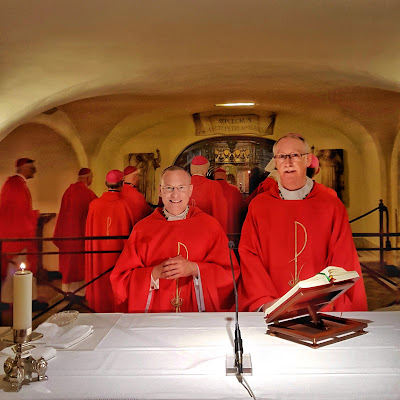