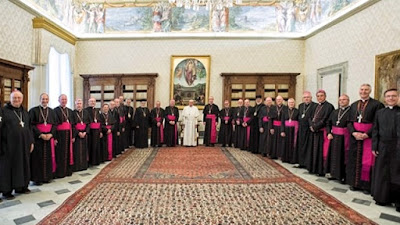 The Bishops of Western and Northern Canada are here now in Rome for what is called our visit ad limina apostolorum. This means, literally, “to the threshold of the Apostles.” Bishops are required by  canon law to make a pilgrimage to the tombs in Rome of the Apostles Peter and Paul. The requirement historically is to do so every five years, but with the growing number of Bishops such frequency is not possible to maintain. The last time the Bishops of Canada made such a pilgrimage was in 2006. We do so by region, and these days it is the turn of the Bishops of Western and Northern Canada. 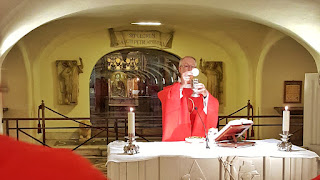 The visit comprises Mass not only at the tombs of the two greatest Apostles and at the two other major Roman Basilicas (St. Mary Major and St. John Lateran), but also an audience with the Holy Father and sessions at a number of dicasteries (Vatican departments) whose officials form the Roman Curia. Our pilgrimage runs from today to this coming Saturday.

So, today it started. And what a beginning!!! We began with the celebration of mass at the tomb of the Apostle Peter beneath the high altar of St. Peter’s Basilica. Then two hours later we were ushered into the office and library of his Successor, Pope Francis. He met with us for two and a half hours!! Before anything else, this unusually long period of time speaks volumes about his desire to learn from his brother Bishops about the situation of the Church in our part of the world and of the needs of God’s people. We were all flabbergasted by such generous availability. 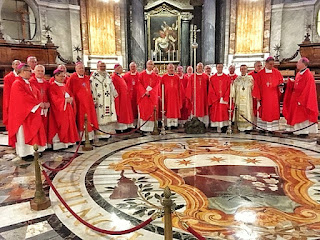 There was no set agenda. The Holy Father simply left it to us to share our experiences or pose questions, and he adapted himself to our needs. We talked about many things, including the reality of migration, the lived reality of our Indigenous peoples, the hopes and pains of our young people, and the challenges of secularization. He listened carefully throughout the encounter, and offered responses, insights and his own experiences, which gave beautiful voice to his pastor’s heart. He encouraged us to stay close to our people, to accompany them with the truth and beauty of the Gospel, freely and willingly to enter into dialogue, even (and especially) with people who are far from the Church, and above all to continue to be men of deep prayer, attentive and open to the movement of the Holy Spirit, who enables us to serve free from fear. Seated next to him, I was able to see clearly his facial expressions as he listened and responded to what he heard from us, particularly when we spoke of hardships and suffering among our people. He truly has the heart of a shepherd and feels deeply, even from a distance, the pain of God’s people. I saw, too, his joy as he listened to the good things that God is doing for us and among us, a joy reflected in a beautiful and spontaneous sense of humour.

Of course, the Holy Father is the Pope, the one to whom, as Successor of Peter, we have pledged our obedience and who has the final word in the Church. At the same time, we were welcomed by him as brother Bishops who share a common mission, and I’m sure we each left his presence encouraged and affirmed by the encounter.

Now, for the rest of the week it is a host of meetings with his curial officials. Please keep us in prayer, and above all pray for the needs and intentions of Pope Francis. 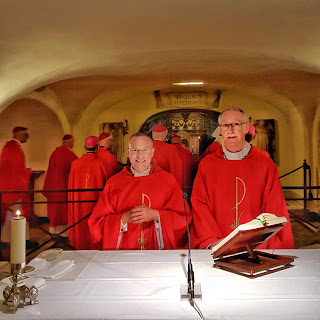