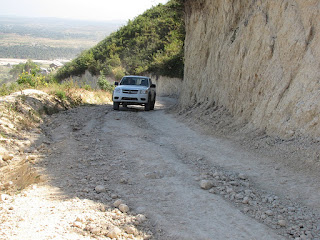 Up into the mountains today just outside of Port-au-Prince. The goal was to visit some of the projects of the Port-au-Prince bureau of Caritas Haiti which are supported by Development and Peace. We spent hours on steep and unbelievably rough mountain roads, largely washed away by the deluges of the rainy seasons. (Someone remind me NEVER AGAIN to complain about the quality of Edmonton streets! 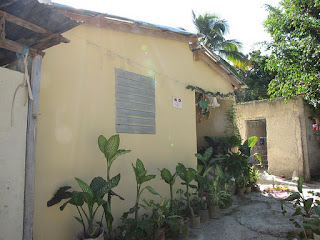 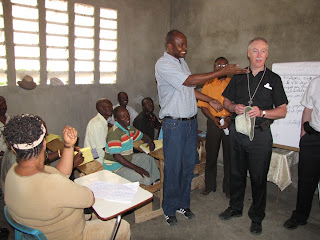 Supported by a variety of partners, Caritas Port-au-Prince runs a continuum of projects that help people rebuild and sustain their lives. One of these is in the mountain village of Duval, where ninety per cent of the dwellings were destroyed by the earthquake. Slowly but surely residences are being provided to the people - simple concrete structures comprising two bedrooms, a dining area and a storage room. As I approached one of them I saw a flower garden planted outside and up against the house. It had obviously been carefully tended - a sure sign of the family's pride in their new home and in themselves. I'm not good at naming plants, so don't ask me what they were. No matter. The family had been helped to recover their sense of dignity, which is so easily lost when one has no place to live.

From there we went further up into the mountains where two important projects supported by Development and Peace were being directed by Caritas. 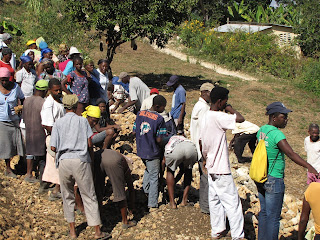 Both had to do with teaching the local peasant farmers how to conserve the soil which is so easily damaged and lost during the torrential rains. In both locations the local people all banded together for the work, in this case for the construction of walls along the slopes of the mountain. As we visited, some of the workers came up to us and began to chat. I was particularly struck by the comments of one man, who expressed his deep gratitude, not only for the assistance being given, but also for the simple fact of having been noticed. Referring to Caritas, he said, "If it weren't for them, no one would know we were even here." By the presence and assistance of Caritas, the local people knew that not only were they known but also that their existence was valued. Other projects supported by Development and Peace, which are equally aimed at helping the people attain sustainable living, are micro-financing, risk management in the face of other possible natural disasters (we dropped in on one of the classes being held in a simple parish school) and the raising of livestock.

We were also introduced to two local priests. Each lives in the midst of the people, and their placement isolates them from their diocese and their brother priests. Truly devoted men. The people spoke to me very warmly about the priests, in whom they find a shepherd who loves them and whom they love in return. In the person of these priests and in the workers of Caritas, these people in need know that the Church is near to them and from this they draw hope. It is this hope that I saw in the flower garden.