We returned this morning from Hinch to Port-au-Prince. Words simply cannot describe the squalor in which thousands upon thousands are striving to live in this city. Yet words are even more inadequate in the face of the interior devastation wreaked upon thousands of children who are referred to as the "restavek". This is creole for the French "reste avec" (stay with). It refers to the terrible reality of what amounts to human trafficking. Families in the city "acquire," through intermediaries, children of the country to do domestic work in their homes. The parents of these children, eager to give their children hope but without any understanding of the reality of the city, "give" their children over to the receiving families with the understanding that they will be cared for, given an education etc. The truth is the opposite. Children ranging in age from six to fifteen years old are brought into the homes as domestic workers, and only a very small percentage of them are given any education at all. In effect, most are treated as slaves and suffer various forms of maltreatment. They usually remain separated from their families for years. 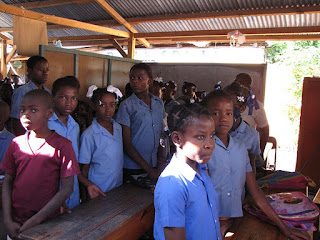 In response to this horror is an organization called Foyer "Maurice Sixto." A partner of Development and Peace, it seeks to create harmonious relations between the parents of the children and the children themselves as well as with the receiving families, sensitize society to this phenomenon, work at preventing the spreading of this problem, and give both basic education and professional formation to the children themselves so that they might have hope for integration into society. Within it all they strive to give the children a childhood. Many do not know their birthdays and have therefore never been celebrated personally. Many live without being hugged with genuine affection and love. The Foyer surrounds them with love and the affirmation of their personal worth and dignity. They give them the opportunity to play and develop their inherent talents. They celebrate birthdays. In short, they make it possible for these kids to be kids. 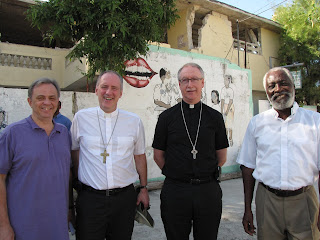 When we arrived the children that were gathered for their school day broke into a song of welcome. You can probably imagine how emotional that was for all of us. Thank God for this group that works so tirelessly to draw the children to this oasis of love and hope.

At the end of the day we met officials from Caritas Haiti, a D&P partner for many years. They explained to us the network that exists between the national office and the various local diocesan Caritas bureaus. Much effort has been expended to help rebuild their people and their society, and our plan is to see some of those projects tomorrow.