A Tent Cathedral and a Forest Nursery 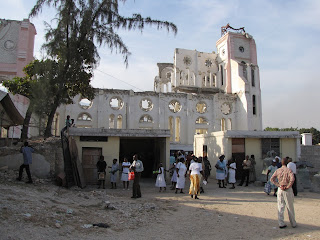 A once magnificent building that now stands in ruins. Next to it a number of tents under which the people now gather to celebrate the Eucharist. This is what I discovered when I celebrated Mass at the "cathedral" on Sunday at the invitation of the Archbishop of Port-au-Prince, Most Reverend Guire Poulard. The cathedral was totally destroyed by the earthquake, as were adjacent Caritas and diocesan offices. The Archbishop most graciously invited me to preside at the Mass with his people, during which Archbishop Durocher preached a wonderful homily on the virtue of hope.

The building is in ruins but the Church is alive - it is alive in the resilient hearts of the people. Their suffering -- who can imagine the depth of it? - is etched on their faces, but they continue to lift up their lives to the Lord, whom they know to be near, especially in the Eucharist. 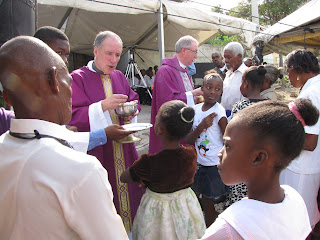 Our Eucharistic Lord calls us to be the agents of this presence to others. The Eucharist, which draws us into the self-offering of Christ himself, sends us forth to offer our lives for those in need. Celebrating the Mass in the very midst of incredible hardship brought this home to me very strongly.

Following our celebration we traveled over the mountains to Jacmel, where Development and Peace has been partnered for a long time with an organization founded in 1989 by Canadian religious sisters, Les Soeurs du Bon Conseil, to help women escape violence.
Called Famn Deside (Femmes Decidees), this is a group of women who have organized themselves to resist violence, and to educate both women and men as to the rights of women not to be violated, to be educated, and to be honoured. It began under the Sisters' direction with thirteen women, and now counts more than 800 members. We met with a group of them who welcomed us warmly. Very moving were their stories of pain and courage, especially now as they have to struggle against an increase in violence in the camps following the earthquake. Due to their efforts the violence in areas where they make themselves present is slowly diminishing. When we met afterward with the Vicar General of the Diocese of Jacmel, he shared with us how much the work of this organization is appreciated and supported by the local Church. 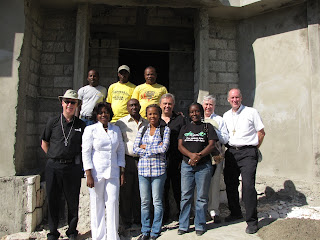 The next morning we visited some of their projects. Deep into the forest we went. En route we visited an edifice being constructed as a shelter for women and their children fleeing violence, and I was honoured to bless it at their request. From there we continued into the countryside, and to say that we went "off the beaten track" would be a huge understatement. It was the first time I've driven into a river in order to cross it. When we arrived at a small forest village, we proceeded into the bush on foot for quite some distance to an area where women have fashioned a nursery for the cultivation of tree seedlings, which are then transplanted to produce food for personal and familial sustenance as well as for the market, and to contribute at the same time to the reforestation of the land. The women living and working in this area met us very warmly as a group (age range: 19-80) and shared with us the new hope that they have received from the assistance offered by Famn Deside. Many of them were learning to read and write for the first time in their lives, and I will not forget the look of happiness and pride as they told us so.

Equally etched in my memory are the songs of determination and hope that they shared with us, before treating us to a beautiful lunch from their own produce.
After this a three and a half hour ride across the mountains back to the chaos of Port-au-Prince. As I looked at the endless stretches of misery, I kept thinking of the people I had just met, especially their deeply held conviction that they are contributing to the rebuilding of this country in a substantial way by their work. They are right and deserving of our support.
Posted by Archbishop Richard W. Smith at 10:12 PM