Today's events gathered around the theme of the relationship of Jesus with his Father in heaven. At the outset, we situated the whole day by reference to a line from the Gospel of John which has always caught my attention and left me thinking. At 14:31 we hear Jesus say, "I do as the Father has commanded me, so that the world may know that I love the Father." In all that Jesus did and said during his earthly ministry, the purpose was to reveal to the whole world the unique relationship he has with his Father. The reason in so doing was to open our hearts to receive from him the wondrous gift of participation in that same relationship! Here we touch the heart of Christian revelation. In virtue of the gift of the Holy Spirit, poured forth upon the apostles at Pentecost and now first bestowed on us in Baptism in order to unite us to Jesus, we become by adoption what Jesus is by nature: children of our heavenly Father. Our appreciation of the significance of the sacred sites we visited today unfolded in this context. 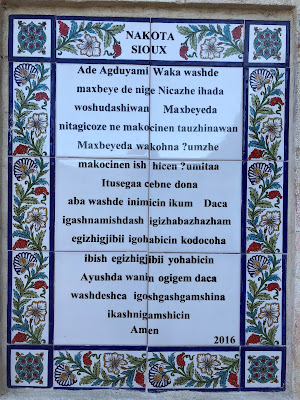 The first was the Church of the Pater Noster (Our Father) on the Mount of Olives. It is built on the site of a cave, which tradition identifies as the place where Jesus would have often spent the night with his disciples, as was not unusual at the time, and where he taught them the Our Father. It was wonderful to gather as a group in that same cave and pray the Lord's Prayer, conscious that what we were doing was possible only because of Jesus's own gift to us of adoption. We prayed first together in English and then each in his or her mother tongue. What a beautiful sound that was! Then we visited the church, which has every available nook and cranny displaying the Our Father in about 170 languages. Among them we found the Our Father in Nakota Sioux, placed as recently as 2016 and the result of the hard work of our own parishioners from the Alexis First Nation!

From this site, pilgrims began the walk down the Mount of Olives, following the Palm Sunday road toward the Garden of Gethsemane. Just as Jesus did when he approached Jerusalem, we stopped at the place where Scripture tells us he wept over Jerusalem (Luke 19:41-44). Prompting the sadness of Jesus was the fact that the people had not recognized "the time of [their] visitation from God." Signs abound still today that this recognition has yet to happen in many peoples and nations: the tensions surrounding us during our visit; the directions taken by our own country that demonstrate estrangement from the Gospel; decisions by our own family members to stray from the practice of the faith, and so on. These are, indeed, reasons to weep, but do we? Children of the Father will have hearts and minds attuned to the suffering of the day. Do our hearts weep, or have we grown cold and indifferent? Here we prayed for the grace of tears that would unite with those of Christ, poured out from the infinite depths of the Father's compassion.

As we continued along the Passover Road, we sang our Hosannas, just as the crowds did that accompanied Jesus along his triumphal entry to the city. At the foot of this roadway, we reached the Church of All Nations, built in the Garden of Gethsemane directly over the rock on which Jesus prayed on that fateful night following the Last Supper. Here our call, as children of the Father, to trust fully in the Father's wisdom and providence, was brought dramatically into high relief. At this place, Jesus fell prostrate upon the rock and poured out his entire self into the prayer he made to his Abba. Fully aware of the pain and death that assuredly awaited him, Jesus asked that the cup be taken away. Once he placed his full trust in the love of the Father, he was able to stand up and face his destiny. Upon entering the church, we, too, approached the rock. In our minds was the teaching of St. Paul that the Holy Spirit within us enables us to make the same prayer that Jesus offered, calling out Abba! Father! (cf. Romans 8:15; Galatians 4:6) As we touched the rock, we brought to the Father all the burdens that weigh heavily upon us, all the circumstances from which we would prefer to escape but cannot, and sought from him the grace and strength to stand and face with confidence and trust whatever is before us. 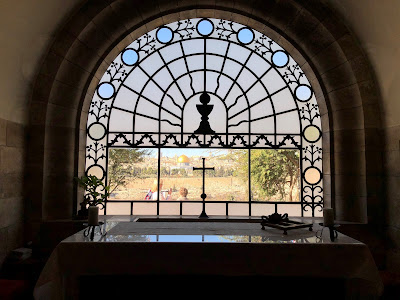 The next site we visited was the Church of St. Peter in Gallicantu, erected on the site of the house of the high priest. Jesus was brought to this place following his arrest to be judged by the Sanhedrin. It was here that Peter denied Jesus. We reflected upon this, noting that it was the look of Jesus that brought Peter to a terrible awareness of his sin of betrayal. Although it is a difficult grace to seek, nevertheless we prayed that Jesus would so cast his gaze upon us as to give us whatever "salutary shock" we need to grow in our conversion to Christ, our love for him, and our commitment to him.

Especially moving at this venue is a dungeon discovered by archaeological excavations beneath the high priest's residence. This discovery answers the question about the "missing hours" in the Scriptures pertaining to the time between his judgment by the Sanhedrin at night and transfer to Pilate the next morning for Roman condemnation. The answer is that Jesus would have been lowered down into this small dark hole to await, bereft of all companionship save that of his Father, the encounter with Pilate. We gathered together in this dungeon and prayed Psalm 88. 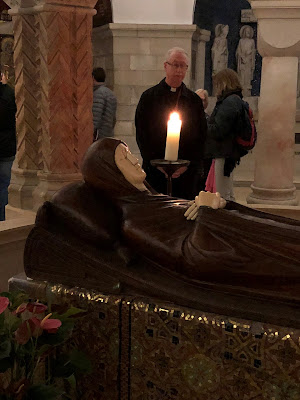 In early afternoon, we celebrated the Eucharist at Dormition Abbey, site of the end of Mary's life and her assumption into heaven. This was a double blessing, given that today the Church celebrates the Immaculate Conception of Mary. Here we pondered the example she gives to all of God's children, namely, to live out our adoption by constant docility to the movement of the Holy Spirit in our lives.

Our final stop was to the Upper Room. Well, not THE upper room, since that, sad to say, was destroyed like so much else in Jerusalem, during the destruction of the city in 70 AD. Available to the pilgrim is a room, dating back to the crusader era, built over the site of the original cenacle. Nevertheless, this was an occasion to thank God for the gift of the sacrament of the Eucharist, without which we cannot live fully our identity as the children of our Father. Since the event of Pentecost also occurred while the apostles were gathered in the upper room following the ascension of Jesus, we offered thanks as well for the gift of the Holy Spirit that animates our life of discipleship.

Final day tomorrow. We are really tired, mostly from the emotional exhaustion that comes from trying to absorb all that has been offered to us. Yet, that fatigue, I know, will stand as no obstacle to the grace that awaits our tracing of the Way of the Cross and solemn High Mass at the empty tomb. 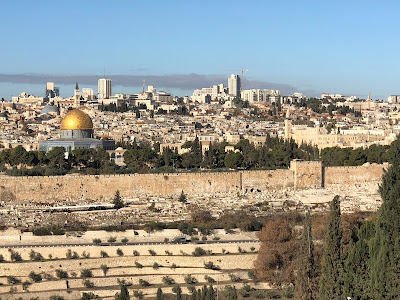