These three words form the theme that united our experiences today. They arose out of our reflections at the ancient ruins identified as the pool of Bethzatha, located today next to the church of St Anne just inside St Stephen's Gate, one of the entrances into the Old City of Jerusalem. We meditated upon the account of the healing of the paralytic by Jesus here at this pool (cf. John 5: 1-18). I have always been fascinated by what must have been going on in the mind of the crippled man when he heard Jesus say to him, "Take up your mat and walk." He knew he couldn't walk, and so did everyone else who had seen him next to the pool for thirty-eight years. Who was this man Jesus to command him to do the impossible? More to the point, what moved within the man to trust Jesus enough to obey him? That is exactly what he did: he trusted and he obeyed. From this profound act of trust and surrender he found himself miraculously healed by the power of Jesus. Trust and obey. Jesus calls forth the same response from us. He summons us outside of and beyond ourselves, often in ways that we know are impossible on our own. Trust and obey. As St Augustine taught, we ask the Lord to give us the grace to do what he commands and to command us to do what he wills. 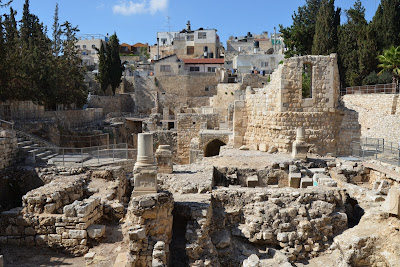 (Before leaving the area we visited the church of St. Anne, built upon the place identified by tradition as the birthplace of the Blessed Virgin Mary. This perfectly preserved church from the crusader era is 1000 years old, and famous for its wonderful acoustics. So, we gathered in front of the altar and became a choir, singing loudly from our hearts Immaculate Mary so as to have the melody resound and echo throughout the edifice. Beautiful. And as to the theme, trust and obey, who could equal our blessed Mother? Only her son, of course.)

The need to trust and obey was in high relief also at the site we visited to begin the day, namely, the birthplace of John the Baptist. A moving Latin inscription marks the spot where he was born: Hic precursor Domini natus est (Here the precursor of the Lord was born). John trusted and obeyed all that was asked of him in his mission to prepare the way of the Lord and to point him out when he came, even at the cost of martyrdom. We reflected upon our own call to prepare the way for others to meet Christ and to make him known by our witness. John's example teaches that we do so by deflection. "He must increase but I must decrease" (John 3:30) are words that summarize John's entire life; we know they must also mark our own. We are precursors to the degree we point away from ourselves and toward Christ. Not easy in a self-obsessed culture. Yet, trust and obey.

We could not leave this particular place without also meditating upon the example of John the Baptist's father, Zechariah. He received an announcement from the angel Gabriel that, in her old age, his wife Elizabeth would conceive a son, who was to be named John. He did not immediately trust the message, for which he was rendered unable to speak. With this as background, we read the account of John's birth and subsequent naming (Luke 1:57-66). Zechariah's confirmation at that moment that the child, against all expectation, was to be named John was his act of faith (trust and obey) in what he had heard from the angel. From that moment he could speak, and his first words were the beautiful prophecy known as the Benedictus (Luke 1: 67-80). The important connection we observed here is that between faith and speech. In our culture, we find ourselves surrounded by a barrage of superficial banality and chatter. The human mind and heart long to hear substantive speech that enlightens and points to meaning; we ache, in other words, for true prophecy. The precursor of Christ must be able to offer such words, and Zechariah teaches that this much-needed speech arises out of the act of faith. It was a privileged moment to be able to proclaim the Benedictus together, in this place where it was first uttered by Zechariah himself. 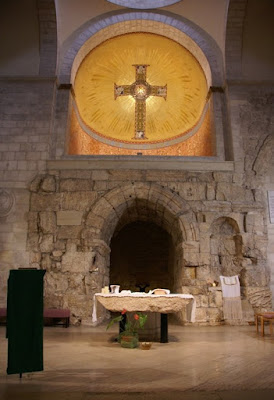 Late morning saw as at the Ecce Homo pilgrimage house for mass and lunch. The building is built over the area where Pontius Pilate condemned Jesus to death, just after presenting him, scourged and crowned with thorns, to the crowd, with the words Ecce homo! (Behold the man!) In his willing submission to his passion, Christ trusted the wisdom and love of the Father, and obeyed, even to the point of death on a cross. Our pilgrim journey has entered a new stage. Until now we have visited places linked with his birth, miraculous healing, and wondrous teachings. Now we are in Jerusalem, the place where he met his destiny of suffering and death. Today we visited the site of the condemnation. Tomorrow we follow more of the painful journey, up to and including his arrest and imprisonment. 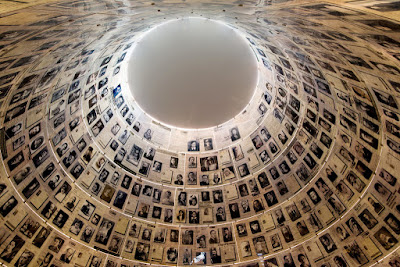 All that Jesus endured for us was undertaken in order to engage fully the power of evil and overcome it in his Resurrection. Where the grace of the Cross has not yet been accepted in the human heart, the gateway is open for evil to have terrible sway. A heart-wrenching reminder of this was given in our tour of the Holocaust Memorial, Yad Vashem, to which we made our way following a visit to the Western Wall, the holiest site of Judaism. Visiting the Holocaust Memorial is not easy. Encountering here images and artifacts associated with this cruelest of atrocities usually leaves one without words. We make our own the words of St. John Paul II, spoken during his visit to Yad Vashem on March 23, 2000: "In this place of solemn remembrance, I fervently pray that our sorrow for the tragedy which the Jewish people suffered in the 20th century will lead to a new relationship between Christians and Jews. Let us build a new future in which there will be no more anti-Jewish feeling among Christians or anti-Christian feeling among Jews, but rather the mutual respect required of those who adore the one Creator and Lord, and look to Abraham as our common father in faith."