That's what our guides call them, and they're the greatest thing. I'm referring to a wireless speaking system commonly used by tour guides today when leading large groups like ours. Each pilgrim carries a receiver and headset by which we hear the voice of the guide "whispered" in our ear, so to speak, as the receiver picks up the words spoken by our leader into his microphone. Hearing that voice of the guide is critical, of course. It directs, informs, and keeps the group together. Even at a distance we can hear that voice, and - believe me - we are listening for it. None of us wants to miss anything important or to get lost! 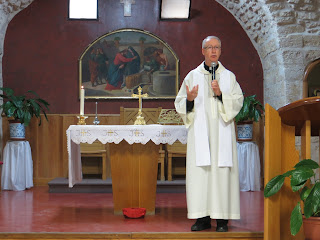 Most of today we spent reflecting upon the listening done by Mary and Joseph to the voice of the Guide above all guides. We were in Nazareth, and visited the sites indicated by tradition as the home of Mary and that of Joseph. In this locale Mary heard God's voice announce to her that she was chosen to be the mother of the Saviour. Joseph heard God's voice summon him not to be afraid to take Mary as his wife and to become a family with her and the child to whom she would give birth. The answer given by each was a complete "yes", born of a trusting faith. Each knew that God is the trustworthy guide. His choice of them for their particular roles, however wondrous and unexpected, could only be right and good. They listened to the voice of the Guide, they trusted and they obeyed. Had they not, it is clear that not only they but also the whole world would have missed out on something of extraordinary importance and remained lost. As we thought about this, it was clear that the same call is issued to everyone: to listen attentively to the voice of the Guide, to say yes, and to follow where he leads.

At the same time, the town itself had two important lessons for us. The first is what we can call the historical particularity of God's action. This hit home when we visited the grotto beneath the Basilica of the Annunciation. This magnificent church rises over a grotto held to be part of Mary's home, i.e., the place where she received the angel Gabriel's annunciation to her. The grotto has been fashioned into a chapel, whose altar has affixed to it a plaque with the words used by the evangelist John to capture the mystery of the Incarnation: Verbum caro factum est (The Word became flesh - John 1:14). But it strikingly adds a word: Verbum caro hic factum est ("The Word became flesh here). At the very spot we visited, God visited the world when his Son became one of us, conceived by the Holy Spirit within Mary's womb when she gave her fiat. I caught many of the pilgrims shaking their heads in wonder at where we were - the place where it all began. Me, too. Yet we can also rightly shake our heads in wonder at the fact that God continues to enter history - our particular history in the places we find ourselves - through the gift of the Holy Spirit poured into our hearts. It falls to each of us to give our fiat, our "Let it be done" to the will of God for us. 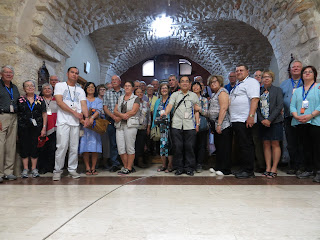 The second lesson came to us from Nazareth's silence. Today it is a busy and noisy place, so I'm not talking about that. I'm referring, rather, to the silence of Scripture regarding the years in which Jesus grew up in this place. We call these "the hidden years" because the Bible tells us nothing about them. In fact, we can also speak of them as "hidden" in another sense. At the time of the Holy Family, Nazareth was so small and insignificant as a town that many had not even heard of it. All of this speaks to the thorough "ordinariness" and simplicity not only of the town but also of the lives of its inhabitants. There was seemingly nothing to attract wide attention. Yet it was here that God chose to enter history, from here that he chose Mary and Joseph, and in here that Jesus lived his formative years. 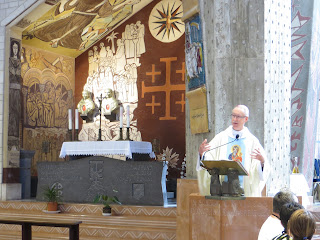 God's criteria are not our own. His choice is moved not by any qualities we may possess (which are his gifts to begin with) or by any worldly standards of notoriety, but solely by his love. God's presence makes the ordinary extraordinary; it sanctifies simple everyday life. This was true of Mary and Joseph and the lives they led in Nazareth.

It remains true for our ordinary living, which God makes holy as we welcome him.


After Nazareth we traveled to nearby Cana. At this place where, in the course of wedding celebrations, Jesus first manifested his glory by changing water into wine (cf. John 2: 1-11), many of the couples in our group renewed their wedding vows. This gave us the opportunity to reflect upon the beauty and dignity of the marriage of man and woman and the life that flows from their union. 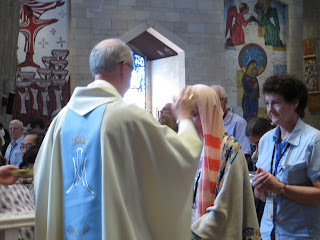 We recalled the teaching of Saint John Paul II that the future of the world and of the Church passes through the family, and so thanked God for the gift of marriage and family, and the families themselves for living it faithfully with trust in God's presence and guidance. What Mary said to the stewards at the wedding at Cana is the best advice possible not only for married couples but also for each of us:
"Do whatever he tells you."

We may not always have "Whisper Walks", but God has given us listening hearts. So let us listen daily to the voice of the Guide, and do whatever he tells us.

Homily during Mass at the Basilica of the Annunciation

Posted by Archbishop Richard W. Smith at 11:41 AM