The Act of Faith

What does it mean to believe? This is the question pushed to the forefront of our minds and hearts as we visited more holy sites today. It will remain the centre of our reflections as the journey continues.

Borrowing an expression I read in a work by Msgr. Luigi Giussani, founder of the Communion and Liberation movement, I like to tell the pilgrims that we are on an "itinerary of conviction." As the apostles walked with Jesus and followed his "itinerary", they grew under grace in their conviction concerning the truth of Jesus. In our own way we are following the same itinerary and seeking that same grace. As we are led more deeply into the truth that Jesus alone is the Christ, we realize that this conviction of its nature demands a personal response, which is nothing less than the total gift of self, in love and trust, to him. Here we touch the nature of the act of faith. 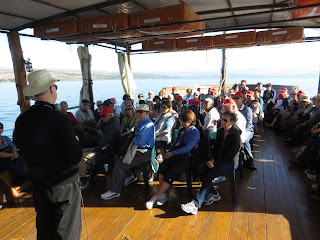 Something of what this means practically was brought home to us in the events of today.

We began with a boat ride on the Lake of Tiberias, often also referred to as the Sea of Galilee. Once we reached the middle of the lake, the boat engines were silenced so that we could pray with the Scripture passage from Matthew that recounts the Lord walking on the water towards his disciples endangered by a storm on the lake (cf. Matthew 14: 22-33). 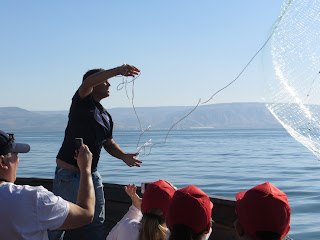 Particularly striking was looking upon the water - the very deep water - as we heard Jesus call Peter to step out of the boat. Geesh! Even on calm waters that call was arresting, to say the least. Yet that's what faith entails - trusting Jesus enough to obey his call to do the impossible, to undertake what we could never imagine doing, with confidence that he will hold us by the arm and never allow us to "sink".

Then we went to nearby Capernaum. We visited the site of the ancient synagogue where Jesus pronounced his Bread of Life Discourse, which we read aloud (cf. John 6: 22-59). These words pertain to the gift that he makes of himself as food - food unto eternal life - in the sacrament of the Eucharist. We entered into the mystery of that promise's fulfillment by celebrating mass. 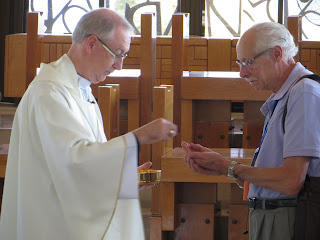 The site was extraordinary. The church is built directly over the remains of the home of Simon Peter, where Jesus stayed, and where he healed Peter's mother-in-law as well as the paralytic lowered down through the roof to him by friends. Yet in this place noted for miracles of healing, the setting helped us realize that the rehabilitation Jesus wishes to effect in our lives reaches beyond the physical exterior to our inner depths. The site was made possible by archaeological excavations, whereby thousands of years of accumulated rubble were cleared away to reach and expose the original. By his love, mercy and forgiveness, Jesus works within the human heart to remove layers of pretense and illusion built up by years of mistakes, failures, and sins in order to bring to the light the beautiful, original and unique creation that is each of us. 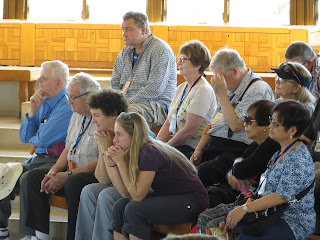 Faith involves opening ourselves, in trust and humility, before this "excavation" by grace so that we discover who we truly are in the eyes of God. In the encounter with Christ and the acceptance of the truth of his identity, we discover the reality of our own.

We also discover our mission. This was the lesson of Caesarea Philippi, which we visited in the afternoon. While Jesus was walking with his disciples in this region, he posed the question of his identity as popularly perceived before getting to the heart of the matter by asking each of them: "But who do you say that I am?" (cf. Matthew 16: 13-20).

When Peter acknowledged the truth of Jesus as "the Christ, the Son of the living God," Jesus assigned him his mission to be the "rock" upon which he would build his Church. It was truly stunning to hear this Gospel passage read with the area's massive rock formation in the background. The grace of the Holy Spirit makes Peter and his successors the rock that grounds what Tradition has since called the indefectibility of the Church. Just as Peter discovered his precise calling in the encounter with Christ, so, too, do we. Faith recognizes the call as right, just and good because it is pronounced by the Son of the living God, and then responds in love with the entirety of one's self.

By means of this pilgrimage adventure we are discovering anew just how wonderfully adventurous is life founded upon faith in Christ.


Homily during Mass at Capernaum (starts with a few seconds of silence)
Posted by Archbishop Richard W. Smith at 10:50 AM