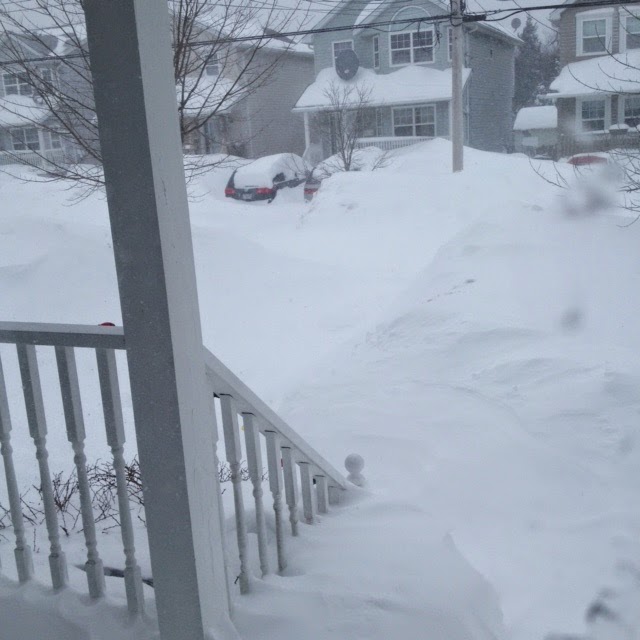 I'm in Halifax for a couple of days. As you may have heard, the folks here have had more than just a skiff of snow to contend with. It's hard to know where to put it all as roads and driveways get cleared. The plowing and the winds have left wondrously high snow banks, and this makes driving very treacherous. The high walls of snow block vision. One has to inch out of the driveway because it is impossible to see what might be coming down the street. Intersections are navigated with difficulty, and exits from highways are perilous, all because it is not possible to see around the obstacles created by the snow.

The weather conditions stand as a helpful metaphor for those obstacles to clear vision that make it difficult to navigate the various intersections encountered daily through normal human interaction.

Human beings are created by God to be interdependent. We need one another. When we understand and accept this, we learn to yield to one another so that life's "traffic" flows smoothly. When our vision of the truth of humanity is blocked, collisions and conflict ensue.

In Sunday's Gospel reading for Mass (cf. John 12: 20-33), we heard Jesus say: "Very truly, I tell you, unless a grain of wheat falls into the earth and dies, it remains just a single grain; but if it dies it bears much fruit." This applies first of all to the death and resurrection of Jesus. His death to self brought life to the world. It is applicable also to us. We see the road clearly and travel along it without collision to the degree that we live less for ourselves and more for others.

In this light we can understand well the massive snow bank that has been piling up over the last number of years. It has so blocked our vision of truth that we are now colliding into one another in ways that truly do threaten life. I am speaking of the illusion of human autonomy. Our individualistic culture has been feeding us the illusion that all that matters is the fully autonomous self. What are no more than desires are presented as "rights" that can be pursued at the expense of others. The most egregious and frightening example of this is the recent decision of the Supreme Court of Canada allowing physician-assisted suicide and euthanasia, about which I commented in a recent pastoral letter. The decision is predicated upon this false notion of autonomy, which blocks from view the sovereignty of God and our collective responsibility for the common good. This will cause collisions that are truly lethal in consequence.

The snow banks here will recede when they are touched by the warmth of the sun, and then people will once again have a clear view restored. Our distorted anthropology will fade away as it encounters the truth of things revealed in Christ. If we allow ourselves to receive both him and his message, then he who healed the blind will restore our sight and enable us to live no longer for ourselves but for him and for one another.