What a joy it was to dedicate the new church and altar of Corpus Christi parish in Edmonton on Saturday. The event was nearly sixteen years in the making, so everyone was understandably bursting with excitement. 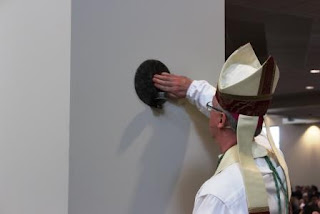 The ceremony involves consecrating the altar and church walls with sacred Chrism. The action brings about a permanent consecration - or setting apart - for a sacred purpose. The building is dedicated for the sole purpose of the worship of God. The altar is made of stone and is not to be moved from its place. In this way is symbolized that the centrality of the Eucharist in the life of the Christian is never to be displaced by anything else. Fundamentally, the altar symbolizes Christ, and its immovability stands for the rock solid fidelity of the Lord to his Church. 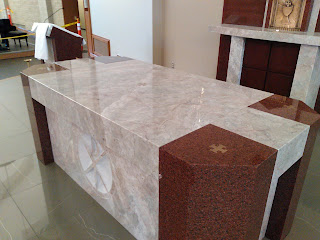 That self same fidelity is on dramatic display throughout the sacred liturgies of Holy Week. The steadfast love of God led to the gift of His Son, whose faithful love of the Father and fidelity to his people brought him to the Cross.

What of our own fidelity? Faithfulness to Christ is the centre of Christian discipleship. Yet, like Peter who denied the Lord, we, too, have lives marked by varying degrees of infidelity. Yet God is merciful. Let us ask Jesus to do for us what he did for Peter at the time of the latter's betrayal: let's ask him to look at us with eyes of mercy to reveal our need for repentance and renewal. By that same mercy may He make us ready to renew at Easter our baptismal promises of fidelity.
Posted by Archbishop Richard W. Smith at 6:30 AM