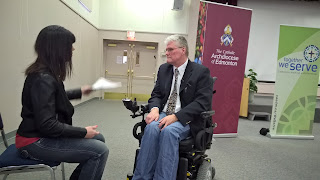 I'm so proud of them!

Yesterday we held a press conference at our Archdiocesan offices to launch the statement of the Alberta Bishops pertaining to the legalization of assisted suicide and euthanasia. Joining me were Mr. Austin Mardon, a man who has many times over the years spoken publicly about his schizophrenia, and Mr. Mark Pickup, who has done the same with respect to the MS that limits his mobility and confines him to a wheelchair. 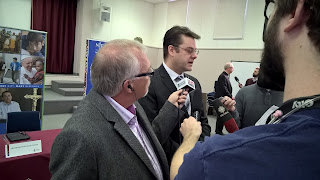 Their words to the media were very moving and compelling, as they shared their love for life and decried these practices which convey a message that the life of people who suffer or are disabled is less worthy of living than that of others. Also present were Dr. Matthew Meeuwissen and Dr. Magdalena Michalska. Their words drew our attention dramatically to the terrible impact legalization of assisted suicide and euthanasia has on those involved in healthcare and on the institution itself. These ways of ending life are the antithesis of medicine. Healthcare workers now find themselves at serious risk of being pressured to act contrary to both the Hippocratic oath and their conscience.

It is not easy to stand before the media and say these things. What impressed me deeply was that, in spite of trepidation, they stood up to stand out, and they spoke truth. Their conviction was so deep that they felt they could not do other than speak out, regardless of how they might be received. I feel immensely proud of them.

Let's follow their example. As we began on Ash Wednesday the season of Lent we heard St Paul tell us we are ambassadors for Christ. Ambassadors are spokespersons, and spokespersons speak. When we speak for life, we speak for Christ, who gave his own life to affirm the inherent dignity of every human life. When that dignity is attacked or threatened, as it clearly is with assisted suicide and euthanasia, we must, as ambassadors, not remain silent. So, too, must we stand with our physicians, nurses, pharmacists and other healthcare workers and stand up for the protection of their right to freedom of conscience.
Posted by Archbishop Richard W. Smith at 9:33 AM