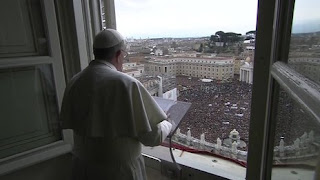 Papal security personnel must be suffering from ulcers. Like a loving father wanting to be with his children, Pope Francis keeps wading into the crowds - unexpectedly. While waiting in St. Peter's Square for the Angelus, I watched images on a large screen of the Pope greeting parishioners as they left St. Anne's Church where he had just celebrated mass with them. When that was finished he went out to the main street (!) to greet the crowds gathered there, before heading to his study window to give his first Angelus message.


And what a message! Mercy. God is all merciful. Jesus is Mercy Incarnate. God never tires of forgiving us. The problem is that we tire of asking for that forgiveness. The Holy Father invited us to imagine a world marked by mercy. If we want a world that is less cold and more welcoming and supportive of one another, then we need to ask for forgiveness and be merciful. What makes that possible is God's mercy towards us, a mercy that is always ready to be poured out in abundance, if we only ask. Does God forgive? Well, as an elderly woman put it to the Holy Father in his early years as a bishop, if God did not forgive us, the world would not still exist.

And what a crowd!! Estimated at 300,000. I've been to St. Peter's Square many times in the middle of large gatherings, but that was my first experience of being literally packed in, like the proverbial sardines. The impact of our new Holy Father on the people of Rome and the world is truly extraordinary. He has won our hearts, and crowds in great number want to see him and listen to his words. 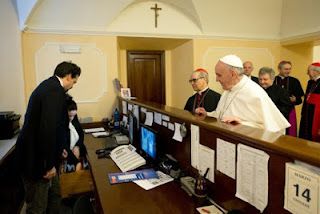 Among those who have already met the Holy Father are the staff at the guest house where I stay when I come to Rome. It is the same place where Pope Francis was staying before the conclave, and he came back the next day to pay his bill and thank the staff. Needless to say they are "over the moon" that he came to see them and say thanks. It gave me a clear idea of the impact that His Holiness will have on many more who, even if they cannot meet him personally, will see his smile and see there reflected the tenderness of God. That's what we saw today at St. Peter's Square. God has given us a great gift: a papa for us all.
Posted by Archbishop Richard W. Smith at 9:56 PM