And the Oscar Goes To … 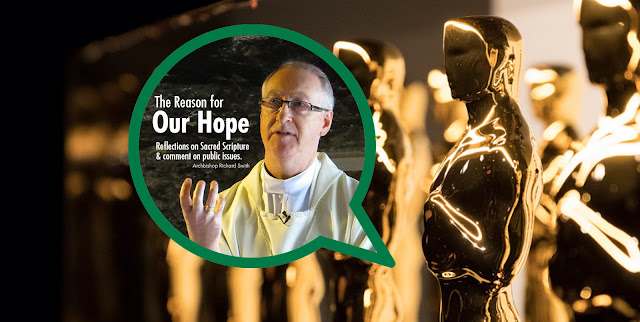 I awoke this morning to the news that the Academy Awards had taken place last night. In the newspapers and online, headlines trumpeted the winners of the various awards. As I glanced at the names of the actors and films, I came rapidly to the conclusion that I live on another planet. I am not a moviegoer and the names were mostly foreign to me. Clearly, however, this is a big deal for many, many people.

Hmm. I wonder how many of the people enraptured by the awards ceremony were equally seized by the drama that unfolded in the Gospel passage proclaimed at mass that same day. Hollywood is the capital of the unreal, yet it garners an enormous amount of attention, commentary and money. The Gospel of Jesus Christ centers us upon what is real. The “screen” on display as we read its pages presents the fullness of life itself. What attention are we paying to it? How do we interact with it?

It is very easy for today’s individualistic mindset to shape our own. This tempts us to write our own “screenplay” and presume to assign to the Lord the role that he should play in our lives and the manner according to which he should act. Yet, Jesus is simply not to be scripted by us. As Word of God, he speaks to us what he has heard from the Father and makes known to us how we are to act in the drama we call salvation history. Moreover, as Word of God made flesh, crucified and risen, he assumes the lead role and thus, as our exemplar, demonstrates clearly how we, too, are to live.

My suspicion is that many people today, upon hearing the words of Our Lord, might be tempted to play the director and call out, “Cut!” “Do a retake!” “You’ve wandered off script!” Such a reaction likely inhabited the hearts of all those who first heard Jesus speak the words recorded in Sunday’s passage from St. Luke.

“But I say to you that listen, love your enemies, do good to those who hate you, bless those who curse you, pray for those who abuse you. If anyone strikes you on the cheek, offer the other also; and from anyone who takes away your coat do not withhold even your shirt. Give to everyone who begs from you; and if anyone takes away your goods, do not ask for them again. Do to others as you would have them do to you.” (Luke 6: 27-31) I’m not so sure the listeners would have awarded an Oscar to Jesus for that! As Our Lord pointed out, we normally script our own lives by loving those who love us and lending to those from whom we are sure to receive back. Nothing extraordinary there, he said. Jesus is calling us to more; much more. Indeed, he is teaching that life in accordance with our identity as his followers will necessarily require a radical re-write of our mindsets and behavior patterns. The script to follow is not one of our own making but that which is given by the Gospel of Jesus Christ.

A world separated from God will not be inclined to give that script an award of any kind. But recognition of its beauty and veracity was, in fact, awarded when Jesus rose from the dead. That is the headline that should capture – and keep – our attention for all time.
Posted by Archbishop Richard W. Smith at 12:54 PM