On Sunday, Edmonton played host to the Grey Cup championship of the Canadian Football League. The days leading up to the championship game were quite the festival! Fans came in from across the country, and Edmontonians, no slouches themselves in the "fan" category, put on a great show, by all accounts. This generous local spirit, while not surprising, is nevertheless remarkable, given that our archrival - Calgary - played for the championship on our own turf, and our Edmonton team didn't. Ouch. And Calgary won. Double ouch. Well, all right - congratulations to our friends in Calgary. But, still. Ow.

Grey Cup Sunday coincided this year with the liturgical feast of Christ the King. This suggests some instructive comparisons that help us to appreciate who is, really, the "reigning champion" and how we are to understand this. 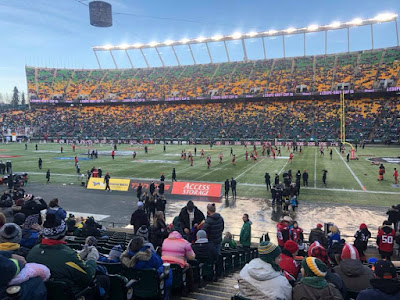 At Edmonton's Commonwealth Stadium, the football players were on display before thousands of people. What was demonstrated was talent, skill, strategy, strength, speed, top physical condition, in short, everything that one would expect of potential champions. At the headquarters of Pontius Pilate, Jesus is put on display before the governor in seeming weakness (cf. John 18: 33b-37). He has been arrested, is entirely in the hands of Roman and Jewish authorities, and will soon be flogged by soldiers and mocked by the crowds. Few could have discerned here the making of a champion in any sense.

At the football match in Edmonton, one team was victorious by the other going down to defeat. On the Cross in Jerusalem, Jesus won the victory precisely through defeat. In the sporting event, championship and loss are opposites. In the death of Jesus, they unite; defeat becomes the means of victory. By his willing acceptance of death on the Cross, Jesus took to himself the misery of sin and death. By rising from the dead, he rose victorious over the power of evil, so that now he might present to God our Father "an eternal and universal kingdom, a kingdom of truth and life, a kingdom of holiness and grace, a kingdom of justice, love and peace" (from the Preface for the Mass of Christ the King).

Jesus Christ is our King. He is the true champion, who now wills to reign in our hearts. We speak of the Grey Cup victors as reigning champions, but I'm never quite sure in what that "reign" consists apart from holding the title. Well, Jesus holds the title of King and his reign is to consist in real sovereignty over our lives.

On Grey Cup Sunday, the champion team is "crowned", as it were, there are many celebrations that follow in the immediate wake of the victory, and then life for the fans goes back to normal, unchanged in any substantial way by the event. To acknowledge Christ as King is entirely different from this. It means complete and lasting change in the lives of those who acknowledge and follow him as Sovereign Lord. In practical terms, it means that we allow no sin to rule in our hearts. It means permitting no falsehood to take directive control of our mindset. It means living not in the lie but in the truth and taking all direction for our lives from the One who alone is Truth. "Everyone who belongs to the truth listens to my voice," Jesus told Pilate (John 18:37). It is what he tells all of us today.

The reigning champion is Jesus Christ. May he reign as King perpetually in truth and love in the minds and hearts of each of us.
Posted by Archbishop Richard W. Smith at 1:39 PM