A Nation Without Borders?


A country delineates itself from others by means of its borders. Borders have been on the minds of people everywhere in the past months because of the issue of migration. Across the globe, millions of people are on the move, seeking a better home. Many are refugees fleeing hardship and the threat of death. As migrants come up against the borders, world leaders are struggling to know what to do, and there is serious disagreement. 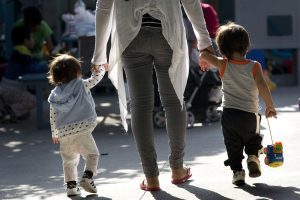 God’s Word draws our attention to another kind of border, not the type that separates nations, but the ones that divide the human heart: borders of fear, hatred, mistrust and suspicion. The walls that at times mark geographical boundaries can seem small and easy to scale in comparison with those put up between people when boundaries divide the human heart.

In Jesus Christ, we see that the love and mercy of God transcend this latter kind of borders. As St. Paul would later write, in his very person Jesus has broken down the wall of hostility that has separated Jew from Gentile and made them one.

In this light, consider what is recounted for us in the Gospel passage from St. Mark that was proclaimed last Sunday (Mark 5:21-43). Two encounters show Jesus reaching across borders in order to eliminate them. In one, divine power goes out from him to heal a woman who had reached out in faith and simply touched his cloak. There’s more to this than just healing. Her form of illness rendered her ritually unclean according to the Jewish religious mentality of the day. In other words, it established a border separating her from other members of her faith. By healing her illness, Jesus removes this barrier and restores her to community.

In the second, Jesus restores to life the daughter of a synagogue official. This was a foreshadowing of what Jesus would do in his death and resurrection, namely, bringing down the border wall we had erected between ourselves and God through our sinfulness and restoring us to communion with our loving God.

The juxtaposition of the two encounters itself has a message: It is only by a return to God, to an overcoming of the border we put up by sin, that we are able to overcome any barriers we place between ourselves and others.

Here we find a message of hope. Sadly, we know there is no shortage of borders in this country separating peoples from one another, whether they are erected by racism, indifference, hurt or bitterness. The way forward, the way of healing and reconciliation, is shown to us by the two people in the Gospel who meet Jesus. What they share in common is a recognition of their need and their consequent turn to Jesus. Unable to overcome the barriers that afflict them, they recognize their powerlessness and turn to the One in whom they recognize unlimited power, a power to heal and save.

This, too, is our way forward. As individuals, as families and as a nation, the call of Scripture is to acknowledge our need and to turn to God. At a time when the attention of the world is riveted upon physical frontiers, the Gospel invites us to deeper reflection and to consider any boundaries within our hearts that keep us from loving one another as he has commanded us to do. By his light, may he reveal to us those boundaries so that, by his mercy, he will dissolve them and lead us back to Him and thus to one another.
Posted by Archbishop Richard W. Smith at 11:49 AM