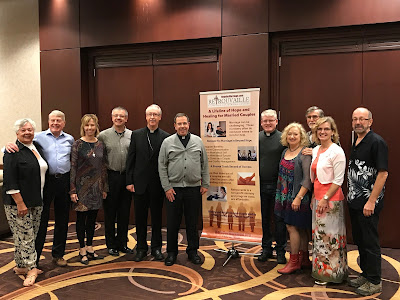 This French word means “rediscovery”. It has been used for the past forty years as the name to designate a very beautiful and extraordinary apostolate to married couples, who are experiencing difficulty in their marriage to the point of being on the verge of breakup.
I spent the past weekend at the annual international meeting of people involved in Retrouvaille. These are couples who, having themselves experienced marital discord and found healing of their marriages through Retrouvaille, are now passionately committed to helping others. The event drew together nearly 600 people from around the globe! Having begun as a small initiative in Hull, Quebec, Retrouvallie has since grown to a large international apostolate operating in Canada, the United States, Central & South America, Africa, Europe, the Caribbean, and the Western Pacific.
Over these past few days, I found myself wondering about the stories of the people. They’ve all come through their own experiences of heartache, pain and fear, and yet now they know healing and joy. The question that I’ve been pondering is, “What made the difference in their lives? What was the turning point?”
﻿﻿﻿ Sunday’s Gospel offers, I believe, the answer. In sum, these couples accepted the invitation.
What invitation? The parable of Jesus, recounted by St. Matthew (Mt 22:1-14) is that of a king who invites everyone to the wedding banquet of his son. That would be quite the invitation to receive!! Yet, remarkably, it is met with indifference, refusal and even hostility. This stands for the invitation issued throughout the history of humanity by God the Father to be with him in a communion of love and joy. Such a communion was often portrayed as a wedding banquet (e.g. first reading, Isaiah 25:6-10). No greater invitation is imaginable!!! Moreover, God rendered such communion fully possible by the gift of his Son, Jesus; hence the image in the parable of the wedding banquet for the king’s son. But that invitation has, in fact, been turned down by many. When the parable continues by recounting the king’s enraged response of destruction, it is making the point that, while acceptance of the invitation leads to unparalleled joy, the refusal of God’s invitation leads inevitably to the opposite - a decimated life.
By God’s grace, couples whose choices or mistakes may have arisen from a refusal of God’s invitation were led to a moment of acceptance, that is to say, to a decision to allow God in to do for them what only He can do. That’s what made the difference! The invitation came to them by the witness of others who had already walked a road similar to theirs, and the decision to accept it was encouraged by the witness of healing and happiness on display in Retrouvaille.
What about the mysterious ending of the parable? A man arrives at the banquet without a proper wedding garment and is thrown out by the king. Acceptance must be accompanied by appropriate “clothing”, which is to say that acceptance is good but insufficient. To accept the invitation to God’s kingdom means also the determination to don the requisite attire of humility, compassion, love, mercy, forgiveness, justice and so on. In the more particular context of a marriage needing healing, accepting God’s invitation to joy also demands a “re-clothing,” i.e. an exchange of the soiled clothing of hurtful attitudes and destructive behaviour for the immaculate vesture of self-sacrifice and self-gift.
I spent the weekend with couples who accepted that God-given invitation and who strive daily to “dress properly” in consequence. Their joy was palpable and contagious. Retrouvaille is a great gift to the Church and a much-needed apostolate for our world.

Posted by Archbishop Richard W. Smith at 9:47 AM