The Archbishop in Kindergarten 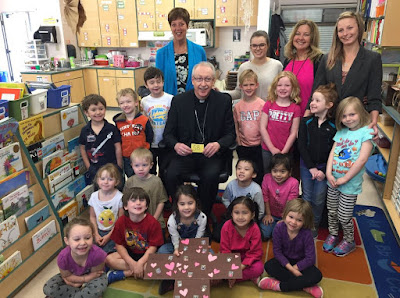 It’s a wonder I ever passed this grade. Who knew it could be so difficult?

I spent Wednesday of last week visiting a few schools in Red Deer. In one of them I was taken to meet the children of the kindergarten class. There they asked if I would read to the kids a book written to tell the Easter story. 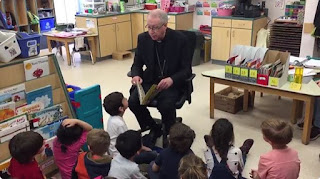 So, they gave me a chair and all the children sat on the floor around me. I read the story aloud to them, and they listened with rapt attention … or, so I thought.

As I neared the end of the not-so-lengthy tome, one of the children hollered out, “Hey! Aren’t you gonna show us the pictures??!!”

Oops. Forgot I was supposed to do that. Another indignant little voice then piped up: “Start over!”

I thought to myself, “How is it possible to mess up something like reading a story to a kindergarten class?”

But I did. Total failure.

The principal and teachers were stuffing their fists down their throats to stifle the guffaws. I can well imagine that copious salt was poured into this wound of embarrassment when the kids later told Mom and Dad that the Archbishop doesn’t even know how to tell the Easter story. Not one of my finer moments.
Tell the story and show the pictures. As I think about it, that’s a pretty good way to explain evangelization. It is not enough simply to tell what God has done for the world in Jesus Christ. That story, as astonishing and beautiful as it is, needs to be illustrated by the “pictures” of lives that have been transformed by God’s merciful love, and those pictures need to be shown to all who listen. 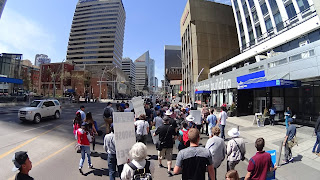 A rather extraordinary “picture” wound its way through the streets of Edmonton last Thursday. Thousands marched in the downtown area in the annual March for Life. When we tell the Easter story, we announce the Resurrection of one who self-identifies in the Gospel as “the Way, the Truth and the Life.” (cf. Sunday’s Gospel passage, Jn 12: 1-12) The Easter story we tell is about life!  On Thursday we illustrated this story by the picture of the March, born of our desire to celebrate life as God’s gift and our determination to speak out in defence of all human life at every stage and in each circumstance. We showed this picture to the city by taking to its streets. Now we pray that, by God’s grace, the telling and showing will bear fruit in the conversion of hearts and the establishment of a culture of life in our land.
Some food for thought: What picture is formed by the way I live my life? Is it consistent with the faith I profess as a Christian? Do Gospel story and living illustration mutually reinforce one another in the “book” which is my life? Serious business. I pray that God enable me to do a lot better in my daily living than I did last Wednesday on my visit to kindergarten class.

See more pictures of my visit here on Storify.

It's not everyday that you get @archbsmith to read the Easter Story to your class. @archedmonton pic.twitter.com/tsPyXwvvWX
— St. Martin de Porres (@stmartinrdcrs) May 10, 2017