In the aftermath of the American presidential election we see that some people are having difficulty accepting the choice. This makes clear that the election of a leader is not the end of the story. That choice has to be accepted if governance by the leader is to be effective.

This is precisely what is at issue in the Scripture passages assigned for Sunday’s celebration of the Solemnity of Christ the King (2Samuel 5:1-3; Colossians 1: 12-20; Luke 23: 35-43). The Church recognizes that Jesus, crucified and risen, has been designated by God as King of heaven and earth, appointed by the Almighty Father to rule over all creation. Do we accept his rule?

This question is not just abstract or theoretical. It bears directly upon our lives in a way that is increasingly urgent.

Think of what we are allowing to govern us now, and I don't mean politically. Recent news reports are filled with stories of an opioid crisis, especially around the drug fentanyl. In the attempt to escape pain people are growing addicted to deadly drugs and many are losing their lives. This is governance by addiction, and we know that such rule is not limited to opioids. There are addictions to other drugs, to alcohol, gambling, to shopping, and - what is especially prevalent - to the mobile device. We can also allow ourselves to be governed by fear and worry, anger and bitterness, by illusory desires, by how we look or the possessions we have or don't have. I am sure you can amplify the list. In these ways we make choices all the time about what will govern or rule our lives, but what we are electing is totalitarian rule; our choices leave us unfree, wrapped in the straitjacket of self-absorption.

Is this the rule we want? Of course not. Neither is it what God wants for us. This is why he has sent Jesus to us. In the words of St. Paul, by giving us Jesus God has brought us out of a kingdom, a rule, of darkness, into a kingdom of light. When we accept his rule in our lives, Jesus leads us from darkness to light, from captivity to true freedom.

How do we, in fact, accept the rule of Christ in our lives? Consider the Gospel passage, which depicts Jesus on the Cross between two thieves.

The first and obvious thing that catches our attention is that this is a very strange depiction of a king. His throne is a cross. He has been crucified, a punishment reserved to slaves and to the worst of criminals. Furthermore, he is not praised but mocked; not only by soldiers but also by the inscription placed above him: "This is the King of the Jews." St. Paul helps us to understand what we are seeing. This Jesus, he tells us in Colossians, is the one in whom God dwells fully, the one through whom all things in heaven and on earth have been made. In Philippians he tells us that this Jesus has dwelt from all eternity with the Father in heaven, and that he emptied himself fully by becoming human and offering his life on the cross. All of this was done to destroy the rule of sin that had so deeply crushed humanity and to establish a universal reign of peace, justice and reconciliation. Jesus rules by love, by self-gift, by mercy and by forgiveness. This is the rule we are called to accept.

A thief teaches us how. 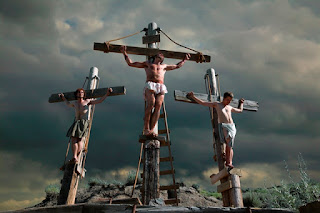 "Jesus," that thief said, "remember me when you come into your kingdom." This is the thief who, of the two, recognized his wrongdoing and sought the Lord's forgiveness. We accept the rule of Christ by acknowledging our sin and weakness, by admitting the various ways in which we have chosen to govern ourselves or to allow other forces to govern us, and then to repent, to say we are sorry and to ask him in his love and mercy to change our lot and give us the peace he wills for us. We accept his rule by surrendering control of our lives to him, trusting in his love and mercy.

The result is peace. Long ago representatives of the tribes of Israel went to David and asked him to rule over them. These tribes had been warring among themselves and wanted it to end. They recognized that the Lord had chosen David to lead them and bring them peace, and protect them from the hostile nations surrounding them, so the elders anointed David king over them all. By their acceptance of David's rule, division and strife was replaced by unity and peace. This foreshadowed what God planned to do for all of humanity in Christ his Son. By raising him from the dead. God has anointed Jesus king of all creation. When we accept his rule through repentance and surrender, our inner divisions are healed and we are granted a peace that can come from nowhere else.
Posted by Archbishop Richard W. Smith at 6:00 AM