Real Hope for a Renewed Humanity

The headlines and news stories lately are discouraging. Bombings, shootings, terrorist murders - even of a priest at mass (!!) - angry political debates, caustic commentary, mounting suicide rates, assisted suicide and euthanasia made legal; it all leaves us wondering: how did humanity ever come to this? How did we sink so low? Is there any reason for hope? 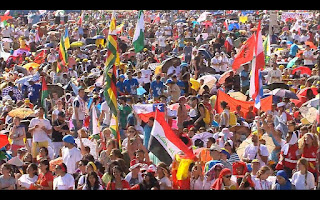 In the midst of the dark headlines that can lead us to despair, one story has emerged these last few days as a bright and hopeful light: World Youth Days. On Sunday Pope Francis was near Krakow, Poland, for a mass with an estimated three million (yes, that’s right - three million!!!) young adults, many of whom had come from almost every country on the planet for what is an extraordinary festival of Christian faith. In fact, the Holy Father has been in Poland for the last number of days for a pastoral visit occasioned by this event, which, since the time of Saint John Paul II who founded World Youth Days, takes place every few years. The young people have been in the country for over a week, singing and dancing in the streets, gathering for mass, prayer and catechesis, and manifesting in many ways their love for Christ and his Church and their readiness to assume the mission that is theirs by baptism.


What a contrast to the darkness that seems to be growing and enveloping the world! World Youth Days reminds us that there is a response to darkness, an antidote to misery: faith in the love of God, revealed in Jesus Christ. It manifests in high relief that such faith opens our eyes to a good and noble vision of humanity, of authentic humanity. In Poland we have witnessed countless young people gathered in unity, joy and hope as they discovered and lived God’s vision for the humanity of which he is the author. Jesus Christ, fully God and fully human, reveals that we live our humanity completely and authentically when we deliberately choose not to eclipse God from our lives but to place him at the centre, and when we, in consequence, honour and respect one another as children of God.

In his homily at the closing mass on Sunday, Pope Francis called on the vast multitude to embrace the future with the hope that comes from Christ. He summoned them to become agents of a renewed humanity by being the bearers of the gaze of Jesus himself, a gaze that “seeks the way of unity and communion,” one that does not “halt at appearances, but looks to the heart.” His words of encouragement to the youth were striking: “With this gaze of Jesus, you can help bring about another humanity, without looking for acknowledgement but seeking goodness for its own sake, content to maintain a pure heart and to fight peaceably for honesty and justice. Don’t stop at the surface of things; distrust the worldly cult of appearances, cosmetic attempts to improve our looks. Instead, 'download' the best 'link' of all, that of a heart which sees and transmits goodness without growing weary. The joy that you have freely received from God, freely give away (cf. Mt. 10:8): so many people are waiting for it!”

Well, there it is: the way forward, the way of hope and joy. It is the way that springs from our encounter with the mercy of Christ, who by his love lifts up to view the beauty and dignity of every child of God and thus calls us to live together in mutual forgiveness, unity and peace. We are grateful to have been reminded of it by Pope Francis and by our young people. This is the way of real hope for a renewed humanity.
Posted by Archbishop Richard W. Smith at 7:07 AM