The attraction escapes me. 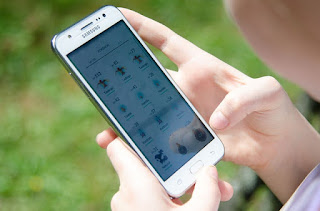 While I was visiting my family last week in Halifax for holidays, one of my sisters downloaded the Pokemon Go app for her eight-year old son. He was very excited and starting running around the family property with the smartphone. He was apparently catching things which existed only in the device, things he enthusiastically called Pokemons. Seemed a little strange to me, but I was happy to see that something had been developed for the amusement of little kids. Later that evening some family members joined me for a stroll along the Halifax waterfront. My nephew had his smartphone and started chasing these imaginary things again. He was not alone. To my surprise, it seemed that every other adult (!!) there was doing the same thing! More than once I feared that a person with their attention glued to the phone would wander off the end of the wharf!

Now, keep in mind that the waterfront of Halifax is frequented by many tourists for its historic significance and natural beauty. I am used to seeing thousands of people out for a leisurely stroll to take it all in. Well, that evening they were there in great numbers all right, but most were turned away from the real beauty around them and saw nothing but their phones and these imaginary little creatures, which somehow were supposed to be findable on the waterfront. I couldn’t see the Pokemons (thank heavens!), but what I did see clearly  were people, phones and an erratic chasing about after nothing.

I’ve heard it opined that this is just another passing fad. Could be. As I think about it though, this transient phenomenon symbolizes a perennial temptation: the preference for illusion over reality and the dedication of enormous amounts of energy and resources to the pursuit of something that doesn’t exist. We are tempted to chase illusion all the time, mistaking it for the real: honour in the eyes of others (Jesus criticized this in Sunday’s Gospel); the identification of happiness with possessions; busy-ness as an indicator of personal worth; taking Hollywood as my moral compass; and so on. Reliance upon illusion in the pursuit of happiness ends in a banal and empty existence. Pokemon Go might well be fun for some. What it represents is no fun for anyone.

A necessary counter-message was heard in Sunday’s first reading from Sirach. It announced the call to humility as a virtue necessary for a well-lived life. Well, true humility is remaining rooted in the real (the reality of God, of God’s love, of my dependence upon that love, of my need for forgiveness and mercy) and the shunning of all illusion that I can find happiness apart from Jesus Christ and the salvation he offers.

Let’s stay rooted in the real and stop chasing after nothing.

Posted by Archbishop Richard W. Smith at 7:04 AM