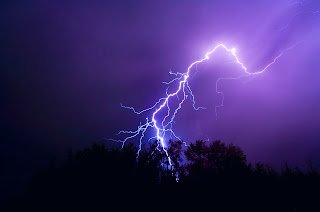 This striking expression is used by Jesus in the Gospel account from Luke that we heard proclaimed at Mass on Sunday. He is addressing his disciples, who have just returned from a mission. They had gone forth on the strength of his command, relying not on themselves or their own resources (“Carry no purse, no bag, no sandals”) but only on the power of his message that the kingdom of God has drawn near in him. They have now returned, rejoicing that “in your name even the demons submit to us!”

In response Jesus replies, “I watched Satan fall from heaven like a flash of lightning.” (cf. Luke 10:17-20)

Jesus grants to his disciples a share in his mission. That mission, as put rather bluntly by St. John in his first letter, is “to destroy the works of the devil” (1 John 3:8). It is this victory over evil that Jesus sees unfolding in his contemplation of Satan falling like lightning as his disciples preach the kingdom in the power of his Word. That power won the decisive victory over the Evil One when Jesus, the Word made flesh, nailed humanity’s sin to the Cross and then rose triumphant from the grave. It remains for the grace of that victory to reach human hearts via the Church’s preaching of the Word and the celebration of the sacraments.

This passage from St. Luke is a wonderful source of encouragement and hope for the Church of every age. Throughout history, and still in our own day, the surrender of human hearts to sin plays no small part in causing terrible human suffering and dark moral confusion. By times it can seem as if this darkness has the upper hand, and it can be tempting to get discouraged. Yet Jesus is teaching us here that the “ruler of this world” is no match for the King of heaven and earth (cf. John 12:31), whose Word echoes in the preaching of the community of his disciples. His victory ultimately cannot be thwarted. Since the mission in which he has a granted us a participation is his, and since he remains always with us, our call is to remain steadfast and confident as we follow him in faith, preach his Word with fidelity, and give witness in our own lives to the transformative power of his love.

The Scripture passage also contains a salutary warning. Jesus cautions against looking for success. When the disciples return to him they are rejoicing in what they saw as a “success”, namely, the submission of the demons to them. But Jesus tells them not to rejoice in that but in the fact that “your names are written in heaven.” We live in a culture of “deliverables”, “measurables” and “outcomes”. Against these standards of human logic and measure we rate the success or failure of various endeavours. This can engender the temptation to “measure” the “success” of our ministry. That judgment, however, belongs only to God. I am reminded here of the famous saying of Mother Teresa: “God has not called me to be successful; He has called me to be faithful.” The source of our joy is that we are called by the Lord, a call in virtue of which our “names are written in heaven”. That is enough, more than enough, to give birth to true joy in our hearts. So let us be faithful and joyful, trusting at all times that the grace of the Lord’s victory is at work in and through us, even when our work may not seem particularly “successful”.
Posted by Archbishop Richard W. Smith at 7:20 AM