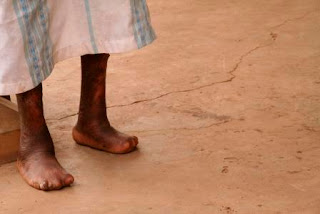 It was quite an afternoon. I arrived Saturday at noon in Chennai, where I've since been hosted by the Salesian Fathers. That same afternoon they took me around the city to visit some of the sites where they are carrying out extraordinary apostolic works. In the space of just a few hours I met children being helped to integrate into society after having been in jail; I encountered another group of very young kids infected by HIV/AIDS; I was taken to a seniors' home, whose elderly residents have no family and who would very clearly be on the street were it not for this facility; and I visited a place for children who had, in fact, been living on the street and who were being helped to a new life. Finally I visited a home for elderly lepers. These are individuals who contracted leprosy at an early age, long before medicine came along to treat the disease.

At each of these places the people I met insisted on receiving a blessing from me. A memory I'll retain for a long time is that of the lepers reaching out to me with hands - absent fingers - to be taken in my own as they bowed their heads to be blessed. I remember asking myself, "Who's blessing whom right now?"

One cannot meet people in such situations without recalling the teaching of Jesus that what we do to the least of our brothers and sisters we do to him. Of course, I gladly offered a blessing, but felt immensely blessed in return by Christ in them. I also went away wondering about the "least". Certainly, in the Lord's eyes, it isn't the kids and elders I met that afternoon. In the heart of Christ, I'm sure they have pride of place.

On my final morning I was blessed to celebrate mass at the tomb of St Thomas the apostle, who brought the Gospel to this land and here was martyred for it. Since his arrival, countless missionaries have watered the seeds he planted, foremost among them St Francis Xavier, whose tomb in Goa I was also able to visit. Their labours have borne great fruit. Here the Church is vibrant! The devotion of the people is beautiful to witness. And the wide-ranging apostolic activity of the six Catholic communities I visited - together with that of hundreds of other religious congregations and the dioceses - is further testimony that the Gospel has taken deep root here in the hearts of believers.

India, a country of many blessings, also faces immense challenges. I pray that the vibrant witness of the Christian community will serve to foster solidarity, reconciliation and peace throughout the land.
Posted by Archbishop Richard W. Smith at 9:53 AM