A Church of Martyrs

The Synod administration gave us a day off today, so I took advantage of the free time to visit a Church in Rome I've long wanted to see. On an island in the middle of the Tiber River here in Rome stands a 1000 year old Church built by the German Emperor Otto III to house the remains of St. Bartholomew, one of the Twelve Apostles and after whom the Church is named, and of St. Adalbert, killed for the faith in Poland in 997.

Yet what I discovered there astonished and moved me deeply. 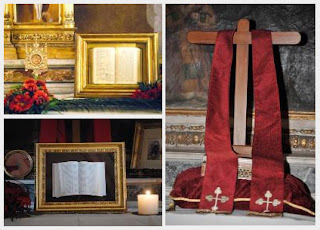 In 1999, as part of the preparations for the Jubilee Year 2000, St. John Paul II created a commission to study the life and mission of the martyrs of the 20th century. The commission did its work in this Basilica of St. Bartholomew for two years, collecting dossiers and relics from around the world. John Paul II wanted the memory of these contemporary martyrs perpetuated in some visible fashion. As a result, each of the small chapels along the sides of the Basilica's interior is now dedicated to the 20th century martyrs from one of the world's continents. It was extremely moving to visit each chapel and read about the martyrs honoured there: martyrs under Nazism and Communism, victims of religious persecution, many killed for resisting pressure to deny the faith and so on. It is a striking reminder that martyrdom for the faith is not something of the distant past. Neither did it end with the close of the 20th century. It is happening now.

This has been one of the things that has impressed me the most during this synod assembly. Bishops and other delegates are gathered from every country on the planet. Many come directly from situations of present persecution. Pope Francis does not tire of reminding the world of the fact that Christians in many parts of the world today are being persecuted and killed, often brutally, for the simple fact of being a Christian.

To any like myself who live in so-called "developed" Western society, this gives pause. If we claim to be Christian, are we willing to proclaim the fact? In doing so we may not suffer martyrdom, but we might very well find ourselves shunned, ridiculed or verbally attacked. How precious is my faith to me? To what degree do I allow it to shape my patterns of thought, speech and action?

For the martyrs of yesterday and today, the faith meant everything, because Jesus meant everything to them. May their witness inspire us to embrace anew and ever more deeply the joy of life in Christ and encourage us to proclaim and live it with boldness.
Posted by Archbishop Richard W. Smith at 8:02 AM