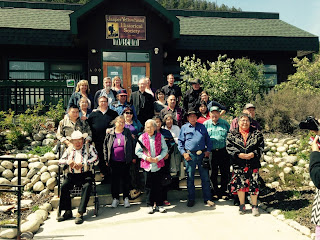 I spent the past week in Jasper with the priests of the Archdiocese for our annual days of study and renewal. The natural beauty of the area never fails to take my breath away. Having an opportunity for two rounds of golf there added immeasurably to the enjoyment!

At the end of the week I encountered another - and deeper - form of beauty that left me deeply moved. I met it in the people of the Aseniwuche Winewak Nation, when we met together for a few hours at the Jasper Yellowhead Museum and Archives.

These wonderful people came by bus on a two-hour journey to meet with me. The gathering was one of a series of listening sessions I am hosting with the various First Nations whose land falls within the territory of the Archdiocese. The Aseniwuche Winewak (or Rocky Mountain People) told me very moving stories of both sadness and forgiveness. The sadness arises from the story of their removal from their traditional land as Jasper National Park was coming into being. As this tale was recounted, what was particularly striking was their willingness to come to the table of reconciliation and extend forgiveness. Therein lies the beauty. The dignity of this people shines forth in their readiness to be servants of healing and reconciliation.

To their great credit, the officials of the Jasper Yellowhead Museum and Archives are working hard toward this same end. For some time they have been working with the Aseniwuche Winewak Nation to ensure that their story be told with accuracy and sensitivity. It is a story which must be made known, and I am edified by the efforts undertaken to make this possible. Also present was an official from Parks Canada, who was greeted with great warmth and affection by the elders. Clearly much is happening toward reconciliation, and I pledged my willingness to participate in these endeavours.

The Rocky Mountains are truly beautiful. Of yet greater beauty are the hearts of the Aseniwuche Winewak people. It is an honour to know them and a blessing to have been able to spend time among them.
Posted by Archbishop Richard W. Smith at 9:15 AM