An Emptiness that Heralds Joy

This morning we set out so early I think we woke up the rooster. Wakeup call at 4:00 am (!) and on the bus at 5:00 in order to begin the Via Crucis (Way of the Cross) at 5:30. The early start was definitely the right call by our guides. As we walked and prayed along the Via Dolorosa throughout the Old City of Jerusalem, we had it practically to ourselves. More significantly, while the darkness of early morning was a fitting companion to our solemn remembrance of the Lord's suffering as he carried the Cross to Calvary, the rising of the sun at the moment we began our solemn celebration of the Mass of the Resurrection recalled nature's witness to the in-bursting of light upon the world when the Lord rose from the dead (cf. Matthew 28:1).

Our Mass was celebrated at the Lord's empty tomb. The key word here is "empty". From the beginning the Church's proclamation has held up the emptiness of the tomb as indicative of the Lord's resurrection. The tomb is empty because he is risen and has appeared to his disciples! Yet he remains with us, especially in the sacrament of the Eucharist. One of the pilgrims told me he found this powerfully expressed in the very way this unique Mass is celebrated. The congregation assembles outside of the tomb, while the priest celebrant(s) enters the tomb for the Liturgy of the Eucharist, using an altar just above the slab on which the body of The Lord had been placed when he was buried. When the priest next appears to the congregation it is to present the Eucharistic Lord ("Behold the Lamb of God ..."). I admit I had not thought of this at the time, but it does express in striking fashion that the same Jesus who died on Calvary and who rose from this very tomb is present to, with and in his people through the mystery of the Eucharist.

Both the hill of Calvary and the tomb are enclosed within the Church of the Holy Sepulchre. Immediately following the Mass each of the pilgrims was able to go inside the tomb and reverence this holy site, and then to go up to the place where the Lord was crucified and touch the very rock surface on which his Cross had been raised. At such a place, reflecting upon the infinite love of Jesus for the Father and for us that took him to the Cross, and the power of that love over all evil as manifest in the resurrection, we knew that, because of that same love, we need have no fear. What joy! As the Holy Father Pope Francis has said more than once, no Christian can be a "sourpuss" when we know the love of the Risen Lord and the hope it gives.

Following a pause for breakfast, we went to the Church of St. Anne, near the city entry variously known as Sheep Gate, Lions Gate, or St. Stephen's Gate. This is a twelfth century church built over the place identified by tradition as the home of Saints Joachim and Anne and, therefore, the birthplace of Mary, marked by a cave beneath. There are astounding acoustics in this building, so we gathered inside to sing some hymns to our Lady. Next to the church is the pool of Beth-zatha, where Jesus cured a paralyzed man (cf. John 5:1-18). We read aloud the Gospel passage, and asked the Lord to heal us of anything that keeps us paralyzed and unable to move forward, such as fear, guilt, shame, etc.

From there we made our way to the Western Wall, the only part of the Temple of King Herod that remains following its utter destruction by the Romans in 70 AD. It is thus the holiest site in Judaism, and on this Sabbath Day we saw many devout Jewish families praying at this famous wall. For our part, we read the narrative in the Gospel of John that recalls the cleansing of the Temple by Jesus and his prediction that the Temple would be rebuilt in his Risen Body (cf. John 2: 13-22). This gave us occasion to remember the teaching of Saint Paul that each of us is a Temple of the Holy Spirit (cf. 1Corinthians 3:16), so we prayed that the Lord cleanse us by his mercy and rebuild us into his authentic and joyful disciples.

Tomorrow we head out to the desert and the Jordan River, where we look forward to the renewal of our baptismal promises. 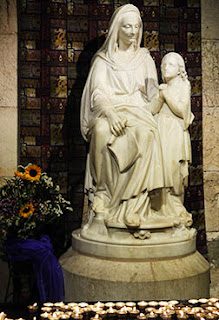 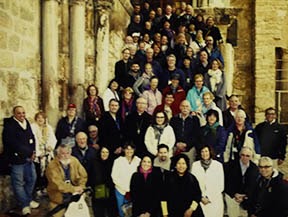