Blow Away the Smoke Screen

A National Post article of June 22, 2012, cited ethicist Margaret Somerville in relation to the debate on euthanasia and assisted suicide. Referring to the practice of co-opting the language of compassion to justify these forms of terminating human life, she called it a smoke screen for killing. Spot on. Now, one year later, we see the artifice on full display in Quebec's Bill 52, introduced last week in the legislature of that province to legalize euthanasia. "Terminal medical sedation" and "medical assistance in dying" are the masks used to cover the truth that what we are talking about is the intentional and direct killing of another human being or helping others to kill themselves. It even goes so far as to speak of these as forms of palliative care. This distortion of language is advancement of a cause by means of confusion. Euthanasia is not palliative care; it is killing. Euthanasia is not compassion; it is the choice to terminate the sufferer rather than the suffering.

Euthanasia, together with assisted suicide, is rightly considered a crime according to Canada's Criminal Code. Both need to remain so. To get around this federal law, the Quebec Bill presents this as a matter of health care. I kid you not. Their point is that, since health care falls under provincial jurisdiction, the Quebec government would have the right to make such legislation. Let's hope the federal government will challenge this nonsense. A lethal injection is not health care; it is homicide. 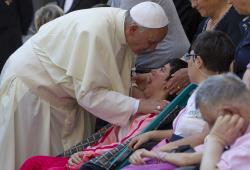 By way of providential contrast to the Quebec government's choice of death, the Holy Father Pope Francis presided at a special Mass in Rome Sunday in celebration of the Gospel of Life, and called on all people to say "yes" to life, not death. We say a resounding "no" to euthanasia, assisted suicide and other instruments of death because, in the first place, we give a joyful "yes" to life.

Life's beauty is not a function of something else. It is marvellous in and of itself. Notice the utilitarian and individualistic mindset behind the arguments for euthanasia. Human dignity is based upon "usefulness", and one's desire to be killed is presented as an expression of autonomy, the right to determine the course of one's own life. No. Life's beauty is not linked to health; human dignity is not a function of utility; autonomy is not a matter of self-determination. Human beauty and dignity are inherent, grounded in our status as children of God. Autonomy, linked inseparably with a properly formed conscience, is the capacity for genuine and right relationship with God and others, and for the faithful exercise of my responsibilities toward them. We say yes to life because it is, simply, good. Furthermore, we ought not arrogantly presume we are masters of life, when we are not its author. We are, rather, stewards, responsible to Another.

Check out the statements in response to Bill 52 by the Assembly of Catholic Bishops of Quebec (in French) and the Catholic Organization for Life and Family (COLF). In addition, I recommend you keep handy COLF's statement Euthanasia and Assisted Suicide: Urgent Questions. It clarifies definitions and distinctions that help us see the smoke screen for what it is and blow it away.
Posted by Archbishop Richard W. Smith at 10:36 AM