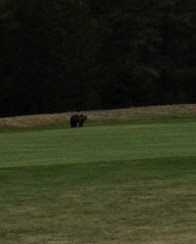 There are times when you like to be first. Take the other day, for example. I was out with some priests for a round of golf at Jasper, and the three of us on my team ran smack up against a grizzly bear. (Yes, again! Getting to be a habit. Not sure what it is with me and bears; perhaps I should lose weight.) We called the park ranger to come, which he did - eventually. The first thing he and other officials did when they arrived on the scene was to stop the groups of golfers following us. I was pleased that they were being cautioned, but I must confess to wondering when the ranger would get around to the three of us who were actually entertaining the bear. Would've been nice to be first. (Thanks be to God, it all ended harmlessly for both man and beast.)

Most of the time, though, being first is not what it is supposed to be about, especially for disciples of Jesus Christ ("the first shall be last..."). For the Christian, the will of God and the needs of others are our first considerations. As they are fond of saying in the Madonna House community, founded by Catherine Doherty, "I am THIRD." Yet time and again, even in situations deprived of grizzlies or other dangers, we seem naturally to think of ourselves first. This is one of the abiding effects of original sin. To get beyond this tendency to self-focus and self-promotion, to be turned inside-out, as it were, we need a great deal of assistance.

Such help is what we celebrated Sunday, the Solemnity of Pentecost. We heard the narrative of the Apostles being turned inside-out by the bestowal of the promised Holy Spirit. Prior to this wondrous gift, they were locked inside rooms and closed in on themselves. The reception of the Holy Spirit transformed them and sent them out to the known world, docile to His promptings and filled with the wisdom and understanding that accompanied His presence within them.

Our world needs us to be outward - focused, not closed in on ourselves. During our clergy study days last week we listened to a number of sobering presentations on the astoundingly high prevalence of domestic violence and addictions, particularly to the evil of pornography. There is great suffering among people today, much of it borne in silence and anxiety. Jesus sends us to them with the hope that His Gospel gives. Let us pray that the Holy Spirit will heal us of any self-centred desires that keep us from attentiveness to the needs of those around us. I might need to be first in situations of real and imminent danger. Most of the time, though, it is more in keeping with my commitment to follow Christ that I be third.
Posted by Archbishop Richard W. Smith at 2:00 AM