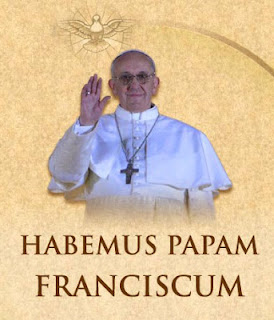 I won't forget this! Last night I arrived at St Peter's Square just in time to see the white smoke go up! The atmosphere was electric!!! Impossible to describe. Then I joined the immense throng of people who hoarded together, full of anticipation, to await the announcement of the one chosen to be the new Successor of the Apostle Peter.

Pope Francis I. The very name says so much. Saint Francis is known, and universally admired, for his love for Jesus, for the Church, for poverty, for brotherhood, and for making known the Gospel. This was all instantly on display in the brief first encounter between the new Holy father and the people of Rome and the world. He won us over in seconds! The people all around me in that famous square reached out to embrace the new Bishop of Rome with cries of Francesco! Francesco! Most touching was his invitation to pray together for the Lord's blessing upon him so that he might in turn bless us. The crowd shifted in an instant from rapturous cheers to absolute silence as we prayed as one. At that moment we knew in our hearts that we have been given a wonderful gift in the person of our new Pope, who, by his choice of name and personal manner, has called us to be people of prayer and holiness, of friendship with Jesus and one another in Him, of solidarity with the poor, and of evangelical mission.

+RS
Posted by Archbishop Richard W. Smith at 7:10 AM